From the Water reviewed by Rick Davis 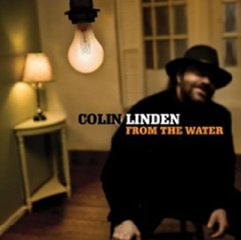 Colin Linden is a new discovery for me but has done work for over 30 years it seems.
Artists such as The Band, Colin James, Keb Mo, Tab Benoit, The Blind Boys of Alabama, Whitney Johnson, and Michelle Wright have covered his material. He has produced 70 albums, has played on over 300 recordings, and has appeared in films, and has recorded music on the soundtracks O Brother Where Art Thou and Devine Secrets of The Ya Ya Sisterhood. He has been recently touring with Emmylou Harris and has performed as a part of the group Blackie & The Rodeo Kings. Colin tells the listening audience "I have been playing country blues, '20s style acoustic blues since I was a really a little kid." His blues influences include Howlin' Wolf, Charlie Patton, Son House, and Blind Blake.

From the Water was created by Linden and friends in wake of the passing of his close friend, keyboardist Richard Bell, once a part of Janis Joplin's Full Tilt Boogie Band. Musicians performing on the cd include Gary Craig (drums), Johnny Dymond (bass), Bryan Owings (drums), and John Whynot (keyboards). Additional guests include Paul Reddick (harmonica) and The Memphis Horns featuring Wayne Jackson.

According to Colin, "From The Water contains some of the grooviest, funkiest, and most soulful songs I could have written and recorded." It starts with the title track "From The Water" spotlighting some of Linden's exceptional slide guitar work and is one of the best tracks on the cd. "Mon Coeur Est Dans Tes Mains" is his first song written in French featuring a very lonely sounding slide guitar solo by Linden. "Built Right On The Ground" sounds like a deep roots blues tune right out of the movie O Brother Where Art Thou. "Smoke 'Em All" is an acoustic masterpiece written by Linden and his wife about Richard Bell. "Trouble Only Comes In 3's" co-written with Richard Bell, starts like a jump blues tune right off the album done by Jump In The Saddle, another great jump blues band.
"Between The Darkness and The Light Of Day" is a soulful number with The Memphis Horns in the background. Linden creates a spiritual sound in his acoustic number "I Have Seen A Miracle". An up tempo song " You Have The Devilment," features great harmonica and keyboard background, blending with Colin's guitar solos. He slows things down with "John Lennon In New Orleans" and "Later Than You Think". "The Price You Pay" remind us about the high cost of love. "Linden's country blues style is really present in "Sinking Down Slow." I think the song "The Heaven Me" shows how versatile Colin Linden can be on guitar. In this tune, he mentions his friend Richard Linden and concludes this great country blues collection with a spiritual number "God Will Always Remember Your Prayers."

I would like to quote a statement from the release information on From the Water. "There is something very special about Linden's way of writing and presenting songs- there is a perfection and passion in every note and lyric. His love and knowledge of music permeates in every song and it is never more evident than here in From the Water.
Posted by Crossroads Blues Society at 12:18 PM

You are discovering it from 30 years great man you have lot of patience..
Carol
Best Affordable Security Systems Suitable for Renters and Apartments, Business and RV