From the Root reviewed by Steve Jones 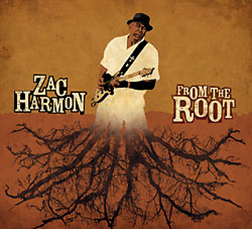 Zac Harmon’s discography is quite impressive. As an LA studio musician for many years, he recorded with many fine bands and musicians. He was finally “discovered” in 2004 when he was sponsored by the Southern California Blues Society and won the International Blues Challenge as “Best Unsigned Band.” Two years later he won the Blues Music Award for “Best New Artist.” He originally hails from Jackson, Mississippi, and his bop claims he is disciple of Jackson’s Farish Street blues sound. His musical roots are strong and his talent is exceptional!
“From the Root” is his fourth CD (his first with Northern Blues after a French release and two others available on CD Baby) and showcases Harmon’s songwriting and performing abilities. It is a beautiful blend of blues, soul, and a little reggae. It captured my interest immediately; I was tapping my foot and groovin’ to the beat on the CD’s first track.

About half of the songs are straight up blues. “Hattie Mae,” “Keep the Blues Alive” and “Scratch” are great examples of how this artist excels in the Delta tradition. His blues are awesome and the backing sounds from the other band members are equally good. Jimmy Z’s harp work is exceptional throughout.
The other half of the album focused predominantly on Zac’s funky and soulful side. The opening track “Don’t Give Me Another Reason” smartly mixes soul with some blues. Sueann Carwell’s vocals with Harmon on “The Price of Lovin’ You” are sultry and seductive. “Back Bitin’ Back Stabbers” and then Smile on Your Face” and “Want Ads” are at ends of the soul spectrum, from a funked up dance tune to two that are in the style of older Al Green stuff.

It’s a great CD and Harmon shows his talents and versatility. To note, Zac will be performing locally at the Paramount Blues Festival in Grafton, WI, on Saturday, August 22nd, 2009 and I look forward to the show! He’s a great musician and performer, and his new CD is worth checking out!
Posted by Crossroads Blues Society at 1:35 PM