Done With the Devil reviewed by Mark Thompson 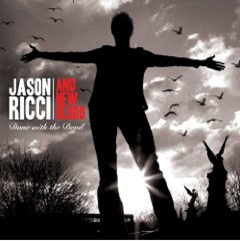 Through their many appearances over the years at Big Cities Lounge, Jason Ricci and New Blood have developed quite a local following. It is always fun to count the number of harmonica players in the audience at one of their shows. But Jason is not the whole show, a point he firmly emphasizes in the liner notes on the band’s latest release. Last year Shawn Starski was named one of “The Top Ten Hottest New Guitar Players” by Guitar Player magazine. Todd “Buck Weed” Edmunds is a monster bass player, equally at home playing James Brown funk or big band jazz. Drummer Ed Michaels is the most recent addition to New Blood. His skill as the timekeeper provides a solid foundation for the band’s improvisational forays.

Ricci has always been an eclectic musician. He has solid credentials as a bluesman, having played with the likes of Big Bad Smitty and R.L. Burnside in juke joints throughout the Mississippi delta. But his musical tastes go way beyond the simple 12-bar blues format. Check out the supercharged cover of The Misfits punk classic “I Turned Into a Martian”. Ricci shouts and howls through the lyrics as Starski fires off a taut guitar solo over Michaels powerful rhythm. Then Ricci unleashes one of his dazzling harmonica runs, playing complex lines at a pace faster than the mind can comprehend. The band tackles the jazz classic “Afro Blue”, with Ricci taking the opening solo at a breakneck pace, using a simple diatonic harmonica to create an intricate solo full of technical brilliance. After Starski and Edmunds turn in solid solos, Ricci finishes the track with more outstanding blowing, including a quote from “My Favorite Things”. Producer Phillip Wolfe fills in the arrangement on Hammond organ. The band also stretches out on the Edmunds instrumental, “Ptryptophan Pterodactyl”, with Wolfe on the Fender Rhodes keyboard.

The disc also features plenty of blues material. Willie Dixon’s “As Long As I Have You” is propelled by Michaels big beat . Ricci hoarse vocal contrasts with the clean guitar lines Starski contributes. Michaels handles the vocal on his original , “Keep the Wolf From My Door”. The track’s menacing tone comes from Starski’s outstanding guitar work and a booming bass line from Edmunds on the sousaphone. The band goes acoustic on “How It Came to Be”, with Starski singing his composition and playing the dobro. The title track is a high-energy rockin’ blues piece with more stellar harp playing from Jason. The band plays tribute to a friend lost to cancer on “Holler For Craig Lawler”.

The soulful “Sweet Loving” has a strong vocal performance from Ricci and some sparkling melodic guitar playing from Starski with another solid contribution from Wolfe on organ. Jason is even better on the autobiographical “Broken Toy”, his impassioned vocal and harp playing effectively conveying the dark emotional content of the track

After playing hundreds of gigs for each of the last few years, Ricci and his band mates have developed into a musical powerhouse. They have the talent and skills to head in any direction that their musical muse takes them. Producer Wolfe has done his job, keeping the band focused and reining in some of the excess of prior projects. The end result is the strongest release yet for Jason and New Blood. This one should please their many fans and garner them some attention from discerning listeners around the world.
Posted by Crossroads Blues Society at 1:42 PM

They have visited big cities also i didn't know this it's a nice Biography about him..
Carol
You cannot go wrong on the best security systems