Living in the Light reviewed by Steve Jones 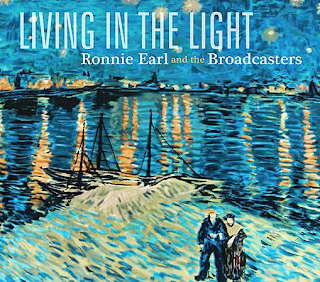 Ronnie Earl’s approach to both his life and music are thoughtful and reflective. The original tunes and the choices for covers allow you to feel the compassion of this man in his work. A great set of musicians joined him for this album and he gets them to perform in the same manner; they really deliver the goods. This is an exceptional CD with a dozen solid and soulful tracks.

Kim Wilson provides vocals and harmonica on three cuts. Robert Jr Lockwood’s “Take A Little Walk With Me” is downright full of the blues. In “Child of the Survivor” Earl’s lyrics allow Wilson to delve respectfully into the Holocaust. Earl (the child of two survivor parents) asks in his song, “Have you heard the blues, do you know the blues, do you know what it’s like to hear the cry of the Jews?”, and Wilson’s demonstrative vocals impress while his harp punctuates this touching track. “Donna Lee” is another original song in the traditional Delta blues style with Earl’s masterfully picking at his guitar and Wilson showing great restraint on both the lyrics and harp in this slow and seductive blues.

Bob Dylan’s “What Can I Do For You” features Dave Keller backed by the 10-person choir from Earl’s First Baptist Church of Littleton asking both vocally and with their music what they can do for the Lord. Keller’s great vocals are featured on another number, the powerful opening song penned by Earl “Love Love Love.”

“S.O.S.” and “Recovery Blues” are examples of Earl’s seductive charms. These two songs are slow but searing guitar instrumentals featuring Earl at his best with Dave Lumina’s Hammond B3 organ harmonizing and testifying nicely along with the guitar. The CD is full of thoughtfulness and restraint, showing the human is greater than the instrument and that music does not have to be excessive to be impressive. Earl’s guitar and the supporting work of Wilson, Keller, Lumina, Jim Mouradian on bass, Lorne Entress on drums, David Maxwell on piano for a couple of tracks, Rod Carey on bass for one cut and Jason James on second guitar on another give us a clean and beautiful set of songs to kickoff the summer with! If you love the blues delivered by musicians in touch with both their souls and their instruments, you cannot pass this one up!
Posted by Crossroads Blues Society at 1:31 PM