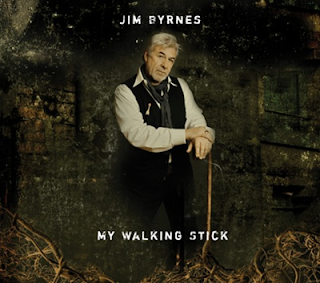 Jim Byrnes may not be a familiar name to most people but fans of the old television shows Wiseguy and The Highlander will certainly recognize this actor who also has had a lengthy recording career. Originally from St. Louis, Byrnes has been living in Toronto for decades and has been won numerous Canadian blues music awards. His new release features a variety of styles of music that explore the roots of American music.

Byrnes handles all of the lead vocals and adds guitar to several tracks. He receives excellent support from Steve Dawson on a variety of string instruments, Keith Love on double bass, Stephen Hodges on drums and Chris Gestrin on organ. Vocal support comes from the gospel trio, The Sojourners (Marcus Mosely, Will Sanders, Ron Small), on nine cuts.

The eclectic program includes the title track, an Irving Berlin composition with a swing jazz feel accented by the violin work of Jesse Zubot, and a joyful remake of “Lookin’ for a Love” with Byrnes on guitar. He tackles a modern-day classic, “Ophelia”, from the pen of Robbie Robertson. This song has appeared on the playlist for numerous bands lately. Byrne’s voice is tender one moment, then adopts a gritty tone when the tempo picks up speed. It’s generally not a good idea to recreate a classic performance of a tune, but Byrnes is up to the task on “I’ll Drown in my Own Tears”. The arrangement sticks close to Ray Charles’ original take but Byrnes interpretation showcases his impressive vocal skills.

“Three Shots” tells the story of a card game gone bad, a brooding tale of cheating and death. Byrnes lays down some tough slide guitar licks on his original song “Ol’ Rattler”, with Gestrin’s organ driving the arrangement. Another standard, “Walk on Boy”, sports the sound of a hammer driving steel while Dawson contributes an impressive slide guitar work. Two gospel tracks, “What Are They Doing in Heaven Today” and “I Want My Crown”, give the Sojourners the chance to shine in support of Byrnes, who impresses again with range and versatility of his vocals.

Dawson handled the role of producer for this release. His arrangements create a rich musical landscape for the vocal parts. The intricate mixture has instruments moving to the forefront, making a statement and then drawing back to be replaced different instrument. Byrnes ties it all together with his compelling vocal performances. The disc has a slower pace and refrains from lengthy solos. It is a recording that should garner Jim Byrnes some well-deserved recognition for his musical talents.
Posted by Crossroads Blues Society at 1:39 PM

Wow he had a lengthy recording career he is a great actor of that time..
Carol
Professional Monitering security systems for Homes, Offices & Appartments