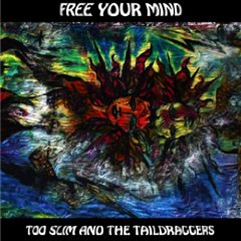 Too Slim and the Taildraggers has developed an eclectic music style which has created a national and international fan appreciation for this blues-rock group. I can actually say that I'm a part of their fan base, following the band since one of their first cds Rock em' Dead in 1990.

Their latest cd Free Your Mind is the 10th studio album by the group consisting of an 11 song cd, showcasing the song writing and award winning guitar of Tim "Too Slim" Langford. Their last cd The Fortune Teller reached #9 on the Billboard magazine Top Blues Album sales chart in 2007 and 2008. They have won numerous awards in Chicago and the western part of the United States. Langford, the band's leader has won awards like "Best Guitarist", "Best Slide Guitarist", and "Best Songwriter.

The newest cd Free Your Mind is collection of Americana, blues-rock, and country blues rock. Langford took time off from touring specifically for song writing and was very pleased with his efforts. The opening song "When You Love Somebody" really typifies the talent of this group. It is really one of those southern blues-rock songs that you can't stop playing. The background vocals of Lauren Evans and Paula and Pamela Mattioli make this one of those "perfect" songs that seems to stand out as one group's finest.
The group is backed in the studio by bassist Dave Nordstrom and drummer Rudy Simone. The follow up song "Last Train" is as powerful as the opening song and is a testament to Langford's exceptional guitar ability and terrific song writing, telling us he is riding on the "last train" headed on a collision course. "Devil In A Doublewide" sounds like a page right out of The Allman Brothers. The first three songs in my estimation are worth the price of the cd. Langford reminds us to keep things in perspective in his unique slide guitar extraordinaire number "Free Your Mind". "Testament" incorporates some of the best swamp blues guitar on the charts today. The band picks up the tempo with "Been Through Hell." Langford's slide guitar licks on this song will send a chill through your spine! He follows with an equally powerful song "Peace With The Maker." "Too Slim" again displays his unique slide blues style in the haunting song "Bottle It Up". In "Throw Me A Rope", the band reminds us of how life seems to deal us some tough situations and Langford cries out a plea to "throw me a line". "This Phone" tells his listeners of that lost love and how it creates the blues within us. "The Light" awakes the spiritual side in all of us with Lauren Evans on lead vocals performing in a powerful gospel voice that could wake the dead.

On Free Your Mind, Too Slim and The Taildraggers give the listeners a great variety of music with songs of "love, perseverance, faith, fiction, frustration, and the craziness of everyday life." This group has been one of my favorites for years.
Posted by Crossroads Blues Society at 12:20 PM