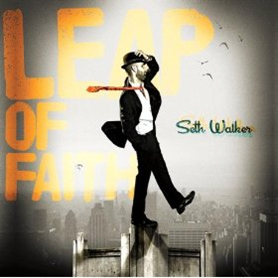 While his name might not be familiar to most of you, the latest from Seth Walker is his fourth release in the last twelve years. Walker spent the last decade honing his craft in the vast musical community of Austin, Texas. He possesses a smooth-as-silk voice with good range and also plays guitar. He is backed by a solid group that includes award-winning Canadian guitarist Colin Linden and Kevin McKendree on keyboards. Several tracks feature a string section with all the parts played and arranged by Chris Carmichael. Walker and Nicholson co-wrote eight of the tracks and Walker penned “Lay Down (River of Faith)”.

The opening track, “Can’t Come With You,” has a jaunty rhythm and a soulful vocal from Walker. Linden’s slide guitar sparks the arrangement. “Rewind” sounds like a lost James Hunter track. Walker can’t quite match the supple nature of Hunter’s voice but the cut is still a gorgeous ballad with string accompaniment.

The title track was on a release by Delbert McClinton back in 1997. Walker handles the up-tempo groove with ease but his voice lacks the gritty edge that McClinton used effectively on his version. Linden contributes another engaging guitar solo. The pace slows down on “I Got a Song”, giving Walker the chance to be a crooner ala Sinatra. Nicholson’s lush arrangement never overwhelms Walker’s voice while establishing the late-night feel that is the essence of the track. Percy Mayfield’s “Memory Pain” is a short piece pushed by a horn section and McKendree’s piano.

“Dig a Little Deeper” sports another soulful vocal from Walker over McKendree’s swirling chords from the Hammond B-3 organ. The pace slows down on “Lay Down (River of Faith)” and the band switches to acoustic instruments but Walkers passionate singing makes this piece one of the disc’s highlights. Nick Lowe’s “Lately I’ve Let Things Slide” gets transformed into a country ballad .

Walker breaks out the boogie beat on “I Don’t Dance”, which should become a theme song for men all over the world ! Seth proves that he has the vocal chops to handle the deeper blues material. And when the band cuts loose on the rocking “Something Fast,” Walker’s vocal rides the beat but avoids the temptation to push too hard in response to the band’s relentless pace. “In the Dark” sports a Bo Diddley beat and some wicked guitar licks from Linden. The disc ends with another ballad, “Falling Out of Love”. Walker’s phrasing expertly captures the inherent longing in the lyrics.

Walker is mining the same musical territory as other singers like J.J. Grey and Eric Lindell - the place where blues, soul, rock and country get so entwined that the resulting mix can’t be classified but it sure sounds cool. His voice may not be as distinctive as those two but this release provides plenty of proof that Walker may be the best singer of the bunch. Nicholson’s production keeps the instrumental solos to a minimum, placing the focus squarely on Walker, whose easy-going vocal style makes every track a delight.
Posted by Crossroads Blues Society at 1:38 PM

He is having smooth and silky voice and he was playing guitar also..
Carol
Plug and play Security Systems no Contracts at the best affordable Prices