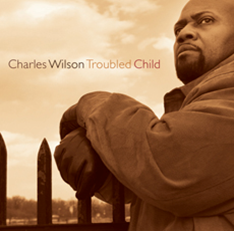 Charles Wilson career started in Chicago at the age of seven. Encouraged by his uncle, Little Milton Campbell, Wilson cut his first record in 1964 and he remains a star on the southern soul circuit. To date his strongest release was If Heartaches Were Nickels on Delmark Records, which led people to peg him as blues singer. While Wilson has cut some strong blues records, he has always been a talented soul singer in search of the right opportunity to display his abilities.

Enter Severn Records, who enlisted David Earl and bassist Steve Gomes to spearhead this project. They selected a stellar collection of tunes from some of the best songwriters in the soul genre - Don Robey, Denise LaSalle, Sam Dees, George Jackson and Clay Hammond. Gomes contributed two gems and co-wrote a third cut with Ronnie Earl Horvath. Next Earl & Gomes surrounded Wilson with a full band, complete with horns, a string section and backing vocals. The horn and string arrangements were entrusted to the veteran Willie Henderson Jr., who arranged and produced hits like Tyrone Davis’ “Turn Back the Hands of Time”. The band includes Mike Welch on guitar, Benjie Porecki on organ and electric piano plus Robb Stupka on drums.

Full-blown productions can often bury a singer under the weight of so many instruments and voices. In this case, all the parts fit together to create the perfect vehicle to showcase Wilson ‘s marvelous voice. Listen to his gentle touch on the opening lines to “The Good Side of My Girl”. By the end of the track, his voice soars over Porecki’s organ swirls as Charles testifies about the love of his life. The ballad “Someone Must of Taught You” finds Wilson pleading for trust from a lover who has been burned before. Wilson’s performance on “Somebody’s Tears” evokes the memory of legendary soul singer, O.V. Wright. The title track is a pointed social commentary on life in the inner city. Wilson expertly captures the despair and pain expressed in the lyrics.
Another highlight is the cover of Bob Marley’s “Is This Love”. All hints of reggae are gone, replaced by a percolating rhythm track that is once again driven by Porecki on organ. The instrumental backing on this track harkens back to the glory days of the Hi Rhythm section. Wilson’s passionate vocal commands your attention in the midst of the horns and backing singers. On the opening track, “Where My Baby Went”, Wilson makes you feel the pain of a good man done wrong by a Cadillac-chasing woman. The hard-hitting groove of “Put Something Into It” serves as a reminder that Wilson is more than just a sweet soul man.

Given the full support of Severn Records, Charles Wilson finally delivers the thoroughly outstanding performance that many have predicted for him, given the opportunity. This is deep soul , presented with class, sophistication and expert musicianship. Wilson disdains attention-grabbing vocal tricks and concentrates on singing from his heart and soul. This recording is a marvelous achievement that may prove to be the crown jewel in Wilson’s career.
Posted by Crossroads Blues Society at 1:36 PM