Lay Your Burden Down reviewed by David Stine 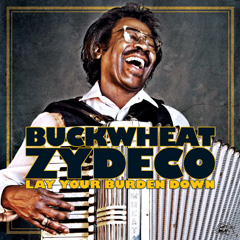 If you pick up “Lay Your Burden Down” to throw on during a backyard party to get things going, you may want to sample the CD first. There are indeed rockin’ zydeco songs here, but they are interspersed with pseudo reggae and slower and more introspective tunes, such as the title cut. “Lay Your Burdon Down” displays Buckwheat’s versatility, but it may not keep you dancing. Cut one is a cover of “When The Levee Breaks” that owes more to Led Zepplin than Memphis Minnie. Sonny Landreth adds some nice slide work behind Buckwheat’s B3, but as I said, the arrangement is too close to Zep’s to be terribly noteworthy. Landreth shows up again on song two, JJ Grey‘s “The Wrong Side.” Grey adds piano to this song about being from the wrong side of the track. Still no party. Things perk up a bit for Jimmy Cliff’s “Let Your Yeah Be Yeah” but slow back down for song four, “Don’t leave Me.” Here Trombone Shorty’s solo saves what might have been a throw-away song of the CD. Buckwheat and band give the reggae treatment to Springsteen’s “Back In Your Arms.” Five songs in and still no party. Aha! “Throw Me Something, Mister” FINALLY begins to get things cooking for that backyard party. It is pretty standard Buckwheat Zydeco fair but comes as a much needed break from the underlying themes of regret and loss that entwine the CD. Warren Haynes’ “Lay Your Burden Down” follows and is the bluesiest cut on the CD with Haynes’ slide work complimenting the tone and theme of the title cut. Steve Berlin adds a nice baritone sax solo to “Time Goes By” which follows. It may just be coincidence that song nine is titled “Ninth Place,” but lyrically and musically it comes close to filler. Song ten is a cover of Captain Beef heart’s “Too Much Time.” It may seem and odd choice at first, but it fits with the overall introspective side of the album. The CD ends with an instrumental entitled “Finding My Way Back Home.” The waltz-like rhythm forces us to look back on the whole CD, and even without the PARTY, it holds up well as whole album. Again, the constant themes here are regret, renewal, loss, and longing. All universal; all needed--especially by a Louisiana native. There is a certain overall sadness to “Lay Your Burden Down”. No, it’s not a party album, but it is a good album and one that should be heard.
Posted by Crossroads Blues Society at 1:24 PM