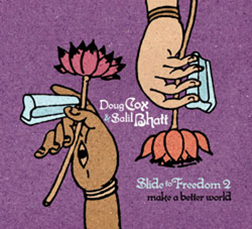 This is quite the striking album. Doug Cox plays Resophonic Lap-styled slide guitar while Salil Bhatt plays slide on his lap with the Satvik Veena. A sequel to their2007 endeavor, Slide to Freedom 2 continues the marriage of the blues with traditional classical Indian music and takes it even one step further. New Orleans vocalist John Boutte adds his soulful warmth and charm with vibrant vocals to contrast the unique sliding sounds of lap played stringed instruments.

Before I get into the music, I feel compelled to talk about the Indian “guitar.” Called a ‘Veena’, it is a traditional Indian stringed instrument which originated back in the 1600’s. A resonator chamber (carved out of some sort of hardwood) attached to a long neck with many strings that play both melody and resonant harmonies give it a familiar sound. Vishwa Mohan Bhatt, Salil’s father, developed the Mohan Veena, a hybrid slide guitar, about 30 years ago. It has 19 strings under very high tension and is played lap-style. It has a carved spruced top, mahogany back and sides, a mahogany neck, and a flat, fretless, rosewood fingerboard complete the construction. His son Salil has created a new variant on the Veena and has named it the Satvik Veena. This is made of a 100-year-old oak wood block; its top made of pinewood to let the sound filter and resonate and it has two f - shaped sound holes to provide the easy emergence of sound. It looks sort of like a confused hollow bodied guitar on some big time steroids.

When I first put the CD in and went through it I said, “Wow!” I had not heard the original CD, so I guess I was not prepared. The sound is lilting and mysterious, yet somewhat familiar. Cox and Bhatt take their guitars seriously and make some beautiful sounds blend into a web of lap slide perfection. I try to stay away from blow by blow reviews, but in this case I make an exception and cover the CD from stem to stern.

The opener, “Make a Better World,” is a song about tolerance and living together. The blend of American and Indian instruments brings home the ideas spoken to in the lyrics and vocals. It is a beautiful song. “A Letter Home” follows, an interesting instrumental piece that winds and slides through hills and valleys for nearly 10 minutes yet it does not drag. Two songs later the guitar players go off on another long instrumental venture called “Blessings,” another compelling blend of American and Indian music with a bit more tempo. Sandwiched between them is “I Scare Myself,” a hauntingly beautiful love song.

Boutte impresses with his vocals; his efforts along with the two slide-men make even the traditional hymn “Amazing Grace” sound fresh and new. Another longer instrumental follows this, “The Moods of Madhuvanti,” and it is classical Indian music done with a Resophonic harmony. They also cover the Beatles’ “For You Blue;” it is interesting to contrast Lennon’s fuzzy lap slide work in the original song with Cox and Bhatt’s slides and Harrison’s vocals with Boutte’s. The Indian guitar sounds in this song feel natural; it is as if the Beatles’ intended this song to be in their post-Maharishi visit music style.

“Freedom Raga” closes the set. A ‘raga’ is a traditional Hindu music style where the tune uses a base note with five or more notes form the basic melody. Boutte’s vocals “I got freedom” and “walk with me” rhythmically repeated and the guitar work make this another compelling tune.

I really enjoyed this album. The more I played it the more the nuances of harmony and tone came out and made the further listening even more fun. The backing sound of Dinah D on bass and Ramkumar Mishra on tabla and percussion make it all the more inviting and driving. And Salil’s dad makes a guest appearance on the Beatles’ cover on his Mohan Veena, making the guitar harmonies even more divergent and special. It is a great album. As a blues fan, if you have even the faintest spark of interest in Indian music, this album is a must to buy!
Posted by Crossroads Blues Society at 1:33 PM