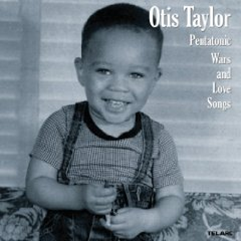 I am an Otis Taylor fan. When I got this disc, I couldn’t wait to hear it. I put in my CD player in my vehicle, and off I went. Upon hearing the disc, I was really disappointed. It wasn’t what I had expected. It was so different. At first, I thought some of the songs sounded like Otis had phoned them in. My first impression was that Otis had run out of juice. Maybe I was having a bad day and wasn’t really ready for something this different from an artist I really like. So, I gave it a couple of more listens just to be sure I wasn’t missing the boat. I was wrong. This is a great disc.

On this one, Otis has found a groove. It is subtle and always there most of the time. It reminds me of Marvin Gaye’s “What’s Goin’ On” album. The songs are softer, but the groove is always there. In a certain way, these are not songs, but snippets or snapshots of feelings of a particular moment. I think Otis wants you to feel or experience what going on through the magic of music. If you let them, the songs will suck you in to what’s happening. Before you know it, you are surrounded by an atmosphere of emotion and feelings. All you can do, is tune in and become part of what it is all about. Go for the ride; it is good.

As usual, Otis supplies blurbs about each song. I didn’t look at them until I started writing this review. A lot of these songs are about love. Topics covered include a man looking for love and sunshine, someone waiting for a lover to return, a musician who misses his guitar dealing with the pain of the tragic death of his child, an 8-year old black boy who falls in love with an 8-year old white girl and wants to walk her home from school. Some of the other subjects covered include a couple that breaks up, and the man moves on to a young girl down the street, a guitar player with a new girlfriend and a new family that is crazy about him. Some of the other songs cover a man who says he will walk on water to get his woman back, a married woman who leaves her husband for another woman, a married man who kills his mistress, and a ghost who wants his lover to join him in the afterlife.

All in all, this is a nice collection the usual observations from Otis Taylor. I was really was impressed with Otis Taylor’s daughter Cassie. She is starting to establish herself vocally and instrumentally. Her bass playing is solid and her vocals right there. More than just a family member, she is making a substantial contribution to the Otis Taylor package.

If you are an Otis Taylor fan, get the disc. If you are not, get it anyway. Take the time to give a listen and you will be haunted and rewarded with some incredible experiences.
Posted by Crossroads Blues Society at 6:56 AM