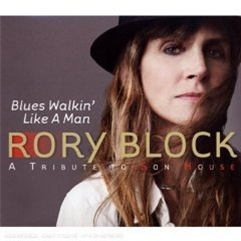 This is Rory Block's latest cd release on the Stony Plain Records label. This recording features 13 songs written by Eddie J. " Son" House Jr. We have all probably heard most of these tunes somewhere or by someone and enjoyed them in the past and Rory Block's new take on these songs is outstanding.

If you are not familar with Rory Block, you are in for a treat with this Tribute to Son House! Son House is what the blues are about. The tunes are about real life, hard times, and good times, too. Rory Block has captured the true essence of the blues with this project. Her slide guitar style and finger picking licks are really outstanding. On most tracks it sounds as if two or three guitars are playing. Rory also has the true blues vocalist quality needed to effectively sing the blues. Her voice and interpretation of the song makes one really listen to the lyrics of Son House.
While trying to be true to the songs of Son House, Rory has put her own style and feelings into each of them. She has changed the tempo on some and added her own style to the guitar licks This is what a true artist does. She has done a awesome job of this.
On "Downhearted Blues", Rory added John Sebastian on the harmonica. Anyone that is aware of John Sebastian knows that this is a welcomed addition. He adds some very tasteful harp playing to this great blues tune from Son House. If you are not an acoustic slide guitar fan, "Downhearted Blues" will make you into one. Rory does a swell job on this cut.
Son’s "Preachin' Blues" makes one appreciate Rory's fine intricate guitar playing, sultry raspy blues voice and the overall feeling of the blues. "Preachin' Blues" is a great tune to have included on this CD.

"Government Fleet Blues" is another of House’s tunes that Rory has chosen to do tribute
to. Again she has included John Sebastian on the harmonica. This is a seven minute track that showcases Rory's great vocal range, slide work, and great blues lyrics along with some fine harp playing by John. To me, "Government Fleet Blues" is the best song on the album. This tune is a musical conversation with the blues.
The entire recording of "Blues Walkin' Like A Man" A Tribute To Son House” is all about Rory Block's great slide guitar skill, her awesome blues vocals and her deep feelings for the truth in the blues of Son House. This whole CD is really a great tribute To Son House, done by a fine musician.
Posted by Crossroads Blues Society at 11:23 AM