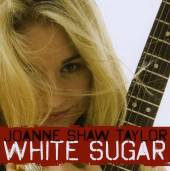 The future of the blues is change and Ruf Records, along with other record companies, keep producing new artists giving us their version of the blues. Here we have a 23 year old British guitar player and vocalist who was weaned on Stevie Ray Vaughn and Albert Collins. Ms. Taylor is an apt student as she has picked up the rocking blues guitar style quite well.

While this is labeled as a “blues” album (the back cover has a stark note as part of it’s artwork to file this CD in the Blues Section of the record store), what we really have here is 80% rock and 20% blues. Two (ok, maybe three) of the ten tracks are blues rock while the others are stylistically very much rock built in the early 80’s mold. I don’t say that out of criticism of the quality of the artist’s guitar and vocals, because they are very, very good,; it is just that stylistically the songs are not really that new and fresh and are mostly are not blues.

That aside, Taylor’s approach to the fret board is clean and intense. Her style is to let us hear what she can do but not feel that she has to give us hundreds of notes per minute. She is focused and disciplined in her guitar work and I liked it a lot. Vocally she is also quite good, giving a breathy and folky-ness to her singing. At times she reminded me of Judy Collins, at least what she would sound like if she sang blues and Foreigner/Journey type rock songs. It’s sort of a twin Collins approach- Albert Collins’ styled guitar with rocking Judy Collins’ styled vocals!

The problem comes from the songs she has written. There is nothing really wrong with them, they just sound like songs I have heard before. The riffs are sometimes a little predictable even thought all ten songs were newly penned by Taylor. The song styles hearken to those of SRV, Jimmy Hendrix, Johnny and Edgar Winter, Styx and (as I noted) even Journey and Foreigner. In “Kiss the Ground Goodbye” she evokes the spirit of Hendrix. They are songs that show us how blues and then rock evolved in the 60’s and 70’s into this style of early 80’s rock. Her two truly blues songs are also lack freshness. Not bad, just not new.

The album does show us that this young woman can play the hell out of a guitar. I was greatly impressed by her work. She really can lay it out and play. The instrumental title track gives us a great rocking SRV approach to guitar and she can play it well. The last song of the album, a blues number entitled “Blackest Day,” starts out slow and builds. It seemed a little dark in tempo to close the CD that way, but it did build up in intensity nicely until the final fade. The fade made it sound like Joanne did not have a good way to finish the song. I was finally getting into it and was a little let down.

If you are a John Mayer or Jonny Lang fan then I am sure you will love this new CD from a talented young female guitar player. She delivers the blues in a rocking manner a la their style. I really would like to see her perform because there is both control and intensity built into her playing that I would love to see and hear live.
Posted by Crossroads Blues Society at 1:30 PM