The Sound of Building Coffins book review by Steve Jones 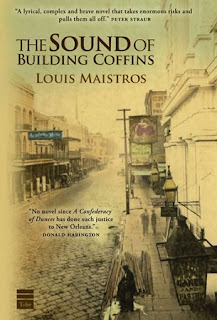 The Sound of Building Coffins
Louis Maistros
Toby Press
http://louismaistros.110mb.com/
http://thejukejoint.com
2009
Buddy Bolden is credited with being the father of jazz music. An extraordinary horn player, his band in the last decade of the 19th century became one of the top black New Orleans bands. There were three types of band there back then: black, white and creole, and Buddy’s band played for all those audiences. His modus operandi was to play loud and play (mostly) in B flat. He transformed ragtime into jazz, stratospherically improvising out of a probable combination of forgetfulness and craftiness. His music was popular but preceded most recording and is not captured for our enjoyment. Little is known about the man for sure, but his heavy drinking and syphilis drove him insane around 1906. He was permanently institutionalized and died in 1931. He faked and played from his head in ways that band members and others have built upon and preserved for us as jazz.

Buddy Bolden has been a character in many novels, and he plays a striking role in this new one from Louis Maistros called “The Sound of Building Coffins”. Maistros paints a picture of turn of the century New Orleans based upon the possession of a young Italian child and the effect of that possession and child on a black family. Bolden’s trumpet serves as a mystical call from the depths of the human soul and his playing is part of the ceremony that saves a young boy who becomes the teenager Jim Jam Jump. The teen idolizes Bolden and lusts for the trumpet that Bolden plays. I can’t comment much on the unfolding story as it would spoil the intricacies and ending for you, but suffice it to say the novel offers some unique supposition for the cause of Bolden’s madness.

The book focuses on the Morningstar family, whose patriarch Noonday Morningstar is a preacher of sorts. He has fathered four children, all named for diseases, who play a role in the early exorcism and later action of the story. Typhus, the youngest son, grows up but never achieves full man size and lives the life of a man-child. Diphtheria, the youngest sister, becomes a prostitute and bears Bolden’s child. Older brother Dropsy is a bit challenged while older sister Malaria is the matriarch of the motherless family. They and the cast of colorful characters weave a tale filled with intrigue, voodoo, mystery, and irony. It is one of the finest new novels I have had the pleasure to read and is one of the greatest New Orleans period pieces put to paper. The city and its’ citizens come to life and literally jump off the pages as the reader moves through the tale of possession, love, hate, intrigue and hurricanes.

I cannot recommend this novel to you enough. It is not a “music book” per se, but music plays an important role in this novel about the Big Easy. It is an outstanding work that blues and jazz fans can appreciate and enjoy. New Orleans is the home of jazz music and Maistro’s tale weaves this into a variety of threads of the lives of the colorful people he writes about. I could not put it down as I read it. This book gets my highest recommendation!
Posted by Crossroads Blues Society at 9:51 AM

He is an extraordinary horn player wow cool i like horn music a lot..
Carol
Get the best FREE offers on the Best Home security Systems

Buddy Bolden was one of the best. The Sound of Building Coffins sounds like one of those need to read books. You told just enough to entice without spoiling.