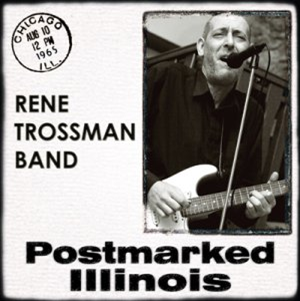 I don’t like giving CDs bad reviews. Honest. When I got the Rene Trossman Band CD, I had high hopes: Trossman, before moving to the Czech Republic, had backed Chicago blues stalwarts Albert King, Otis Rush, Magic Sam and Earl Hooker. With a title like Postmarked Illinois, I thought yeah, Chicago blues!

The CD does start off strong with a great version of Albert Collins’ great instrumental, “Frosty.” Unfortunately, the next song introduces Trossmans vocals. I am still grappling with where the vocal bar should be set with blues singers. The genre began as a vocal medium but has become showoff land for guitar players and harpists giving rise to poorly written “blooze” tunes and so-so vocal chops. Should white guys be given a break? Should “aged in” voices be treated more kindly no matter what color the singer? It’s a tough call.

I will say this, there are issues with Postmarked Illinois that begin with Trossman’s voice. First, he has a very limited range, coupled with intonation problems, and a choked off delivery. All in all, it gives the listener the painful feeling of listening to a heavy smoker in his final gasping days as a singer. Trossman’s guitar playing, however is nicely sedate and tasty. His licks are limited but are nicely augmented by superb keyboarding from Jan Korinek who also produced the CD. The mix of the drums on this disc is a bit overpowering; they are mixed in at the same level as Trossman’s vocals, which sometimes is a distraction. Either because of a poor mic or poor miking, the cymbal crashes sometimes sound like an aluminum pie plate or a chicken being thrown into a big pot of boiling water.

There is no discounting Trossman’s love for Chicago blues, but when he tackles songs like Magic Sam’s “Easy Baby,” it’s clear that Sam (even with his vocal detractors) was a far superior singer. At times Trossman’s vocals are painfully out of his range and the notes just seem to disappear. Examples are the painful-to-listen to “Big Leg Woman,” and “Down and Out.” Trossman covers tunes by Albert Collins, Magic Sam, Earl Hooker, James Wheeler and others. His own compositions are plagued by forced rhyme schemes over cloned arrangements adding nothing new for blues lovers. Again, I REALLY wanted to like this disc, but, to me, it was a painful listen.
Posted by Crossroads Blues Society at 8:06 PM