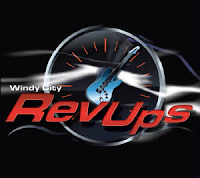 
Rick Reminger and his band may have changed their name, but the sounds these guys make is still pretty sweet. The Windy City Rev Ups serve up 10 tracks of live cuts recorded at a couple of Chicago area establishments (Antioch and Plainfield). The album serves as notice as to what the band can do with some rocking blues standards and their own stuff.

Rich provides the vocals, harp and rhythm guitar. Rick Fobes on keyboards and George Lempers on lead guitar are steady and able. Dave Steffen also fills in on lead guitar on the last two tracks. Mike Maloney on bass and Frank Laubinger on drums provide a good backdrop for the band.

The CD begins with eight covers. They do standards like SRV’s “Cold Shot,” Elmore Jame’s “The Sky is Crying,” a funked up Memphis Slim’s “Every Day I Have the Blues” and Ronnie Earl’s “Follow Your Heart,” my favorite of the covers. The last two cuts are Rick’s original tunes and serve as a precursor to what’s ahead for the band. They have a new CD coming out in the fall that is all original stuff. This CD whets the listeners appetite for their original music and sets the table for the new release, a good strategy by Reminger and Company. I like the two original cuts alot, “Swing Out Chicago” and “I Should Have Known.” The former is a swinging little number while the latter is more in line with their blues roots

The band is trying to move their image from strict blues to also include R&B, funk, swing, rock and dance. No matter what you label their “style,” they are a great little band who can rock it out and get down dirty with any other band!
Posted by Crossroads Blues Society at 8:22 PM