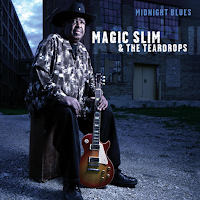 There has been a trend in the music business to inundate an artist with a stable of guest stars in an effort to make the latest recording appealing to a wider range of listeners. These attempts often bury the host beneath the caterwauling of ill-suited guests that have little common musically. When the artist has their own deeply entrenched signature style, it can impossible for all of the elements to come together in a coherent package.

Magic Slim has been a champion of the hard-driving, westside of Chicago sound for over three decades. Once you become familiar with it, his muscular guitar-driven style is instantly recognizable. His new recording features a number of guest musicians but the folks at Blind Pig made some very smart choices, adding other Chicago blues musicians who share the same roots as Slim. Their contributions augment the Teardrops sound with detracting from it. And they leave all of the singing for Slim. The end result is one of Slim's best recordings.

The disc opens with one of the Magicman's original tunes, "Let Me Love You". Slim belts out the vocal with his dark, gruff voice that rides over a surging rhythm from Danny O'Connor on bass and David Simms on drums with Jon McDonald also on guitar. Slim's guitar spits out taut guitar lines that cut like a knife. The next track adds James Cotton on harmonica on the Muddy Water's classic " You Can't Lose What You Ain't Never Had". I can't remember ever hearing Slim playing with a harmonica. But Cotton fits right in, filling in around Slim's vocal before he lays down a solo that proves that age has yet to rob Cotton of his talent.

Lil" Ed Williams joins the proceedings on "Give Me Back My Wig", his slide guitar giving the band an even tougher sound than usual. "Spider in My Stew" has Lonnie Brooks adding his guitar to the mix while Elvin Bishop raises the energy level on another Slim original, "Cryin' Won't Let You Stay". And the horn section added to the closing track, "Loving You is the Best Thing That Happened to Me", sounds so natural that you might think that Slim has always used them. Otis Clay adds backing vocals on this cut

The rest of disc leaves it to Slim and the Teardrops to do what they do best. They slow the pace a bit on a couple of tracks, giving Magic Slim a chance to demonstrate that his limited range doesn't keep him from delivering a stirring vocal. The Teardrops play as ensemble, their tight sound honed by many a night on stage. Slim's sound has not changed over the years, which is a blessing since there are precious few blues musicians playing his kind of propulsive, unadorned blues. Magic Slim has long been one of my favorite blues artists and his latest set proves that he still at the top of his game.
Posted by Crossroads Blues Society at 8:43 PM