Just Between Us reviewed by Mark Thompson 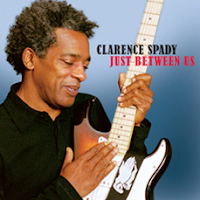 Clarence Spady is a singer, songwriter and guitarist who had a release twelve years ago on the Evidence label. Nature of the Beast received substantial critical acclaim and Spady seemed destined for bigger and better things. One key element in that recording was the use of the Hammond organ, which was just starting to regain its popularity in blues and jazz. Another highlight was Spady’s gritty original blues tunes.

His new effort also features his own material, including two songs that were co-written with Donya Washington. Once again, the Hammond organ plays a prominent role on each track, courtesy of Bob O’Connell or Benjie Porecki. But the music on the latest disc reveals far different influences than the last release.

Spady is now mixing funky soul grooves with a bit of blues for an engaging collection that slowly insinuates it’s way into your consciousness. “Enough of You” has a rhythm that glides along before Spady heats things up with a strong guitar solo. His vocal on “Just Between Us” at times sound like Prince in his younger days, His voice displays a supple range with a slightly higher pitch that consistently breathes life into each cut. He really digs into the harder funk beat of “Won’t Be This Way Always”, with Porecki adding fat chords on the Hammond organ and tasteful fills on electric piano. Clarence veers toward a soul-jazz feel on the guitar passage.

The gospel-tinged “I’ll Go” features strong backing vocals from Meg Murray and Karla Chisholm. The spirit in this song embodies Spady’s view of life – a message of love, peace and forgiveness. “Cut Them Loose” preaches the importance of associating with the right people. Clarence switches to the blues on “Be Your Enough”. This slow-burner features fat chords on the organ from Porecki plus a gritty vocal turn and a taut guitar solo from Spady.

The lone weak track is the instrumental “E-Mail”. It is pleasant enough but it never really develops, despite being the longest cut on the disc. The closing tune, “Candy”, goes back to the up-tempo funk groove with several fine tenor sax breaks from Jacques “Saxman” Johnson.

This project is a real deviation from Spady’s prior work. He conveys a strong feel for his mixture of soul and funk topped off with blues. The eleven tracks shows a verve for life and Spady’s passion for the best it has to offer. Give it a chance – this one will grow on you !!
Posted by Crossroads Blues Society at 12:08 AM