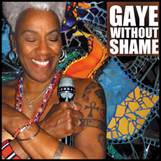 Adegbalola gained attention as a member of Saffire - the Uppity Blues women. For her latest solo project, she has decided to proudly address her sexuality. That is apparent in the opening cut, "Queer Blues", which describes her journey of sexual discovery over a New Orleans style R&B groove. Other tracks are subtler in their approach. Her marvelous duet with Resa Gibbs on Jimmy Reed's "Honest I Do" gently changes your viewpoint on this classic. Gaye works her magic again on "The Great Pretender", creating an anthem for oppressed people of the world.

Another highlight is the stunning reworking of "Let It Be Me' as the voices of Gaye and Cleome expertly dance around each other in a passionate performance. And there is plenty of humor present in Gaye's work, as evident on the rocking "Hetero Twinges", describing a man so good looking that he turns the head of every woman despite her orientation.

In addition to singing, Gaye adds guitar on four cuts. She is well served by the backing band that includes veteran Bob Margolin on guitar and bass, Roddy Barnes on piano and Jim Brock on drums. Margolin's slide guitar drives "Twisted Mind Blues" while Barnes contributes a jaunty piano part on "Tippin' on the Down Low".

There is plenty of fine music and heartfelt performances on this release. Some listeners might be put off by Gaye putting her sexuality out front. Her response is found in the last track. Joined by the Fredericksburg Freedom Singers, Adegbalola lifts up a moving acapella version of "I Ain't Ashamed".
Posted by Crossroads Blues Society at 8:54 PM