Blues is My Life reviewed by Harmonica Joe 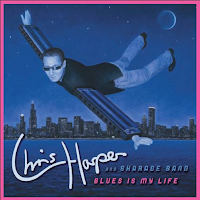 "Blues Is My Life" is a very interesting blues project. Having never hearing of Chris Harper or the Sharade Band, I had no idea of what to expect. With a name like Chris Harper and being a harmonica player I assumed that he was a good one. Harper is a harp player from Switzerland and the Sharade Band is from Italy. In the mix for this project, are the Chicago Horns, Billy Branch and Chico Banks. As you can see from this line up we are in for an international treat!

Chris harper was inspired by the likes of Junior Wells, Sonny Boy Williamson and Muddy Waters at about the age of 12. Good choices they were on his part. Having started to play harmonica at this age has paid off. It is very apparent on the CD that he paid his dues. I would say that his relationship with and learning from the great Sugar Blue is one of Chris' biggest assets. Chris Harper had to have been paying attention!

"Sweet Honey Sunshine," written by Harper, sets the stage for the rest of the CD. It is very evident that the relationship with Sugar Blue was the right choice to make. His harp playing leaves us with a feeling that Sugar Blue is present at the event. The background singers on this tune are a great addition. Gianluca Baroncelli also does one heck of a sax solo for us here.

I have to admit that at first I did not care for Chris Harper's vocals. After listening to most of the tracks five or ten times, I realized that he just has a different quality to his vocals. In the end it was all good after all.

On "Help Me", Billy Branch joins the mix. This is probably my favorite track on the album. The whole band just sounds great. The Chicago Horns are a big plus and bringing in a great keyboard solo by Sharade Band's Giacomo Lauria, makes this tune a step up from the norm.

"Blues Is My Life," written by Chris Harper is maybe the stand out song of the whole CD. It contains everything that this band is about. This is a pretty funky tune. We have great lyrics, the outstanding background singers, Chico Banks on guitar, a sax solo and of course a dynamite harp solo.

"Soul Bossa Nova," is a catchy tune with a Latin beat . This instrumental showcases the Chicago horns, the sax player, Chris' harp playing and the Sharade Bands abilities. This a good closing tune.

This album was produced by Chris Harper and recorded at Delmark Records' Riverside studio. The CD is available at www.cdbaby.com. Chris wrote six of the songs on this CD and did a fine job. As you play each track on the record it makes you want to here the rest of it. Sugar Blue's influence on Chris is ever present, but for sure Chris Harper is not a Sugar Blue clone. He is his own musician and one heck of a harp player.
Posted by Crossroads Blues Society at 8:14 PM