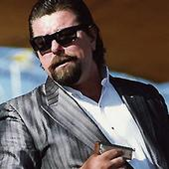 This 1993 recording is another archival release from the late William Clarke's widow, Jeanette, and their daughter Gina. They have been keeping his memory alive with a series of recordings from the vault that have shown that Clarke consistently performed high quality blues with a strong west-coast influence. Clarke played his harps like a jazz horn player, playing with power and technical skill. His bands always had that strong swing rhythmic feel that is present in all great jazz recordings. And Clarke needed a strong guitar player that had the talent to keep up with him. Alex Schultz was a long-time collaborator and his work on seven tracks on this disc serve proof as to the tastefulness of his playing.

The disc opens with a rocking untitled instrumental that features Clarke improvising like crazy on the chromatic harp, blowing long sustained notes before blasting out some rapid-fire, intricate lines that lead to him trading licks with Schultz. Two tracks, "Five Card Hand" and "Educated Fool" are alternate versions of tunes that appeared on Clarke's Alligator Records discs. Also included are two distinctly different takes of "Home Is Where the Heart Is", a Clarke composition. Take 1 is an slow blues that provides further evidence of how strong a singer Clarke was. His harp solo expresses the feelings of longing and despair in the lyrics. Take 2 is more than a minute shorter and sports a piano-driven arrangement at a driving tempo that finds Schultz in the spotlight with a fiery solo. Another Clarke original, "When I'm With You Baby", gets a riveting performance punctuated by Steve F'Dor's piano fills.

The sound quality of the disc is quite good - the performances even better. Clarke learned the lessons from all of the great harp players and developed his own original sound. Hopefully there is plenty more material of Clarke's that has yet to see the light of day. Packages like this will ensure that listeners will never forget this dynamic musician.
Posted by Crossroads Blues Society at 8:25 PM