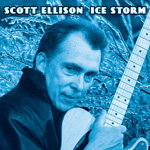 Ellison is another musician who has been out there playing and recording without attracting too much attention on the national level, although some of his tunes have been used on TV shows like "Buffy the Vampire Slayer." Like Haddix, he handles the lead vocals and most of the guitar parts. Ellison also had a hand in writing each song. More than twenty-five musicians and singers make a contribution to the project.

Most of the material falls into a generic blues/rock mode, with the emphasis on the rock sound. A pounding beat and screaming guitars bludgeon the life out of the blues elements. Ellison doesn't possess a voice strong enough to breathe life into his bland batch of songs.

While there isn't anything horribly wrong with "Ice Storm," it contains little that would distinguish it from a legion of other releases.
Posted by Crossroads Blues Society at 8:30 PM