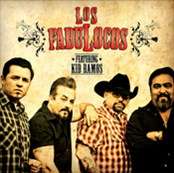 The best American roots music is a composite of a number of different styles that are blended into a savory musical gumbo. Led by guitarist extraordinare Kid Ramos, Los Fabulocos expertly mix strong Tex-Mex influences with blues, rock & roll and Louisiana swamp pop on their debut recording. The band, all veteran musicians, includes Jesus Cuevas on vocals and button accordion, James Barrios on bass and Mike Molina on drums. They create a musical landscape that revisits ground memorably covered by Los Lobos early in their career.

The star of the disc is Cuevas, who dominates the proceedings any time he cuts loose on his accordion. On "Un Mojado Sin Licencia", his fingers dance all over the keyboard, creating exciting runs that serve as contrast to his more serious tone of his vocal done in Spanish. Ramos leads the way with a nasty guitar tone on "Day After Day", but Cuevas elevates the proceedings with more fine accordion over a Hooker boogie beat.

The band takes "Lonesome Tears in My Eyes" south of the border with some fine acoustic guitar and an heart-felt vocal from Ramos. "Educated Fool" finds the group rockin' the Huey "Piano" Smith tune for all it's worth. They cover another swamp pop classic, Rockin' Sidney's "You Ain't Nothin' But Fine", with the guitar and accordion playing off of one another before Cuevas erupts with another exciting solo to bring the proceedings to a close.

Ramos doesn't get the spotlight as often as might be expected, given his stature as a guitar master. He and Cuevas trade licks on a track from the king of zydeco,Clifton Chenier's "All Night Long", which is followed by the instrumental "Burnin' the Chicken". Ramos makes the most of this opportunity to display his prodigious skill on the guitar.

If you are looking for a straight blues recording, this release is not for you. If you are a listener with eclectic tastes, Los Fabulocos will win you over. Their heady mixture of genres and quality musicianship brings a refreshing vitality to every track. This one is highly recommended !!!
Posted by Crossroads Blues Society at 8:27 PM