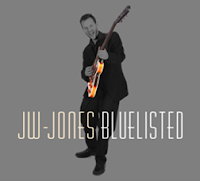 JW Jones, for those of you who haven’t heard of him, is a Canadian singer, guitarist, songwriter. “Bluelisted” is his fifth CD. He is aided on this effort by guitarists Junior Watson and Little Charlie Baty, as well as Richard Innes, and Larry Taylor. I had heard “Out of Service Blues” on Bluesville (XM radio) and I was thrilled to receive the disc to review. Even with pretentiously oblique liner notes by Dan Akroyd (still parading as Elwood Blues, c’mon), I discovered that one song does not a great disc make, nor does enlisting the services of a group of well-know Westcoasters.

Don’t get me wrong, the playing on this disc is first rate. That is not the problem. Jones holds his own very well against chopmeisters Watson and Baty. Jones songs, although somewhat pedestrian, are not god-awful like some I’ve heard. It’s just that after several listens to the disc it started to sound samey samey--too many songs in a moderate tempo and Jones using the same vocal techniques and range. On several plays through the whole CD, I swore I’d heard the same song twice on one spin.

The CD is less than 50 min. long but seems longer. Of the 13 songs, two are instrumentals, which takes some of the burden off of Jones acquired-taste voice. He is not a bad singer; his range is a little high, which makes the delivery of some of his lyrics a seem a bit out-of-character. His insistence on vocalizing the held notes gets old about mid way thought the disc. I believe that fans of The Fabulous Thunderbirds and Little Charlie and the Nightcats might enjoy this disc.

My favorite song is the swinging “Heavy Dosage,” one of the instrumentals. CD jacket notes list order of guitar players taking solos which is a nice touch. The aforementioned “Out of Service Blues,“ allows Baty to show off his harmonica (his first instrument) chops; and this is my second favorite song on the CD. On “Somebody’s Got to Burn,” it almost seems that Jones is singing in a different key than the band, but it could be that there is no really defined vocal melody line. Jones vocals seem to weave in and out at will.

The song arrangements rely upon lots of standard progressions with some little glimmers of bygone guitarists popping up here and there. Jones has studied his Chicago and West coast heroes. None of the songs jumped out at me as soon-to-be classics, but kudos to Jones or not relying on yet another version of a classic blues song. Jones appears to be a young man; with more vocal chops and in a bigger range of tempos, he may still be a contender in a pretty saturated market. There wasn’t enough variety here for me, but you may want to check him out on line and see what you think
Posted by Crossroads Blues Society at 8:11 PM