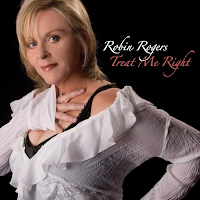 This is Robin Rogers first release on a major record label. She has had some success with prior independent releases and has achieved some recognition in the blues community for her work, including a "Best Self-Produced CD" award from the Blues Foundation in 2005.

This effort features her powerful, brassy voice over the standard band set-up of bass, drums and keyboards plus a horn section comprised of Jon Thornton on trumpet and Tony Hayes on saxes and flute. Husband Tony Rogers handles the guitar parts and helped Robin write seven of the tracks.
Originals like "Can You Hear Me Now" provide the opportunity for Robin to display her impressive vocal abilities. She has a husky tone but can easily glide from a deep growl to the upper end of the scale. "Promised Land" is a gospel workout alternating handclaps with the horn section in support another quality vocal from Rogers. She turns the heat down on "Nobody Stays" but her vocal still almost overpowers the late-night jazz feel of the performance. Using a dobro, a march beat and some somber harmonica from Robin, the group captures the haunting emotions of "Color-Blind Angel", a tribute to Viola Liuzzo who was a civil rights worker murdered in 1965. Musically compelling, the track loses some of the impact when Rogers sings lines like ".. the 3 K's took you out."

Rogers shows good taste in the songs she decided to cover. A lesser-known B.B. King number, "Treat Me Right" opens the disc with a booming vocal from Rogers and a smooth sax solo from Hayes. One of the best cuts is "Ain't No Use", from the pen of Rudy Stevenson. Robin's voice glides through the changes, going from a whisper to a near-scream without a hint of strain.

The sound quality on the disc is quite good but a bit too clean for my taste. Rogers has the vocal chops to handle some rough edges if given the opportunity. She is undoubtedly one of those musicians that is best experienced live. This release establishes her as someone worth paying attention to and should introduce her to a wider audience.
Posted by Crossroads Blues Society at 8:41 PM