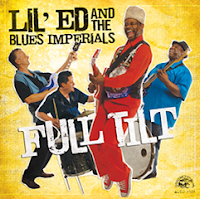 The nasty guitar lick that opens this disc serves as a warning for the raucous proceedings that follow. "Hold That Train" is a stomping opener that announces that Lil' Ed is back and taking' no prisoners. The urgency of the performance captures the excitement of a live show by the band, not a easy thing to do in a studio environment.

And the great news is that the rest of the disc manages to maintain the same high level of performance. Some of Ed's previous recordings have been inconsistent efforts that failed to play to his strengths. This time out Ed has a batch of mostly original tunes that place the band in the houserockin' mode that they are famous for.
Tracks like "Don't Call Me" and "Candy Sweet" feature Ed's razor-sharp slide
guitar licks over the driving rhythm section of James "Pookie" Young on bass and Kelly Lttleton on drums. The other band member is Michael Garrett on second guitar. All three have been members of the Blues Imperials for some time, which has allowed the band to test the material on the bandstand before recording these definitive versions. The sound is enhanced by the addition of Johnny Iguana on keyboards and a horn section of Eddie McKinley on tenor and David Basinger on baritone sax.

Despite the strength of the up-tempo material, the real highlights of the disc are the four slower tracks that feature outstanding vocals from Lil' Ed. "Check My Baby's Oil" is a sexually suggestive track that escapes novelty status due to Ed's convincing performance. Ed explores the crushing effects of love lost on "Life Got in the Way", wringing emotion out of every note he sings before breaking into a brief guitar break. The arrangement gets added weight from Iguana on organ. The autobiographical track, "Dying to Live", gives Ed a chance to share his views on his life, punctuated by stinging guitar fills. "Every Man Needs a Good Woman" is more of the same - deep blues sung with conviction and played with the searing intensity of someone who has stared the devil in the face and lived to tell about it.

The band closes the disc with a tribute to the great Chicago slide guitar player, Hound Dog Taylor, ratcheting up the energy level even higher as Ed shouts out the minimal vocal refrain over frenzied guitar licks. It is a fitting end to an hour of outstanding performances that mark this as best recording from Lil' Ed in a long time. This one is made to be played loud on a Saturday night. Get a copy, invite your friends over and let Lil' Ed & the Blues Imperials provide the musical soundtrack for a rockin' good time !!!
Posted by Crossroads Blues Society at 8:48 PM