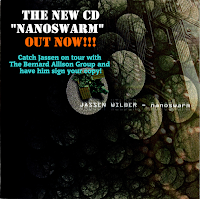 When I got this CD to review I had some decent expectations. The CD begins with a decent enough jazzy cut featuring Jassen on lead bass and Sue Orfield on sax; the tune is called Dark Matter. The next song, Mellow B, gets all smooth jazzy and features a techno sound mixing the styles of John Tesch, the strong bass lead, a Ron Sutton drum solo and a muffled audio telling you about how killer the drum solo is. Well, it was a drum solo but I found nothing too great about it. By the time the third track hits your senses you realize you’ve now been transported to a bad night at Echo’s on late night Public Radio. Another almost schlocky cool jazz track follows. And then we get to track 5, a song simply called God Great Grace. This track mixes the lead bass line with some interesting gospel-like but fake-organ keyboard by Mike Vlahakis. Interesting, but now I am thankful I did not buy this CD on my own. I did not find, see or feel much different in my relationship to God by listening to this song.

Phage is the next track. I don’t know what a Phage is, but after listening to this I really didn’t care to find out, so you can Google it on your own. The song repeats a variation on a lead bass line; by this point one can appreciate Jassen’s virtuosity on bass but it just doesn’t cut it (at least for me). And then 3 and a half minutes into it, the guitar lead makes it’s way through the same repetitive type riffs for a mere 30 seconds before a 2 minute finale rising to a crescendo of repetitive bass licks.

The Point of Pointless is a mix of funk and jazz, the lead bass leading the way for nearly six minutes. The title track is very 50’s outer space sounding, with the spooky alien sounds of keys mixed with the incessant bass line for a new take on a cheap Halloween sound effects CD. My favorite sci-fi movie of all time lends its’ name to the next to last track (Forbidden Planet). It is punky, driving tune with sound effects and distortion. The line, “Woke up early this morning” blares out about 45 seconds into the cut, and then the heavy, driving beat takes over again. 2 minutes later, “Down the road I go, have no place to go,” is prophetically stated. And then a different deep bass voice finishes the cut with the statement that sounds like, “That them blues singing up one side of the wall.” Hmm, what was that all about? It certainly wasn’t blues. The album concludes with another funky track featuring the big lead bass, guitar and a heavy metal sound overlaid on Spyro Gyra and King Crimson mixed together. It’s called “Kill the Rabbit”, but by now I’ve heard enough just to want this to end, and 3:29 later it finally does.

The musicianship here is excellent. The bass, sax, guitar, keys and even the drums are all technically played quite soundly. What I am lost with is the songs themselves. I expected at least a resemblance to the blues somewhere and never found any. Cool jazz with heavy metal is not something I tolerate well, nor is the poor man’s mix of hard rock and funk. If you want to hear some cool bass sounds and a lot of weird stuff, this is your CD. But there is nothing that resembles blues on any level. I’m sorry, but I just did not get this at all.
Posted by Crossroads Blues Society at 8:15 PM

I would like to say thank you for taking the time to publish a review of my CD. .j

Now that I read this review again .My thought your review makes you look like a pompous Cunt of a man . I would like to hear your compositions.Or do you not own your own talent? Does this comment make you feel closer to God? Lol. This is my review of you review .