In Between Time reviewed by Harmonica Joe 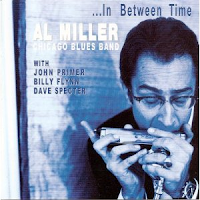 Al Miller’s, “In Between Time”, released by Delmark Records, was recorded in 1999 and originally released in 2000. Miller is an outstanding harmonica player, singer and guitarist who has been playing Chicago style blues since the 1960’s. In the past he has moved to California, returned to Chicago, left the music scene to raise a family then came back to the blues scene with the release of “Wild Card”. Then after several years with health problems he came back and recorded “In Between Time”. The play list for this project includes relatively lesser known tunes by BB King, Johnny Young, Eddie Taylor and Walter Jacobs. Also added to the list are 5 songs written by Miller which make this CD over 73 minutes of strong Chicago style blues.

Miller has a large group of very talented musicians, that we are all aware of and embrace,  joining him for this recording. “In Between Time” features Billy Flynn, Dave Specter, John Primer as well as Miller playing guitar. Harlan Terson takes on the job of bass player for most tracks while Barrelhouse Chuck and Ken Saydak are at the piano while Willie and Kenny Smith and Mike Schick share the drum rolls on different tracks. All this plus several other fine musicians just enhance Al Miller’s ability with the harmonica, guitar and vocals. This man presents his music with much feeling and a great feel for his love of the blues.

“In Between Time” is a strong example of Miller’s tune writing and ability to sing some real slow Chicago blues. The lyrics tell us the possibilities of life that may come to us. Al states “In between times of sickness and in health, darkness and light, when shadows capture the night and when I don’t know right from wrong”. These are all examples that state that we all have a lot going on in our life. Miller on guitar along with Billy Flynn’s slide guitar is really a treat for the ears. Joe Filisko steps this tune up a notch by playing his style of electric harp while the addition of the piano (I do not know who plays here) really makes this tune a hit. Johnny Young’s tune,  “ I Got It”, is a swell instrumental tune showcasing Miller on the harmonica. Al plays with strong tone and a feeling for the mood of the tune. Ken Saydak shows off his stuff on the piano as Billy Flynn solo’s away on the guitar. This track is like a full blown blues jam highlighting the massive talent of these musicians on “In Between Time”.

Al plays his great style of harp on the cover of Willie Dixon’s “Dead presidents”. With John Primer singing the vocals and the saxophones of Berry Winograd and John Brumbach plus Harlan Terson and Mike Schlick leading the way, Miller is allowed to treat the ears to a swell harmonica solo. Also, if you have never heard of a tune called “1839” by Elmore James you will enjoy listening to it. John Primer again sings the lyrics and play guitar while Miller stands out on the harp. This tune has it all as blues tunes go.

With 17 solid tracks and almost 74 minutes of awesome Chicago style blues on “In Between Time” it is very easy to recommend that you take the time to check out the music of Al Miller and the Chicago Blues Band. Miller does not allow himself to change the blues to fit into something other than what they should be. He and the band are a true example of what the Chicago blues are.

Posted by Crossroads Blues Society at 3:57 AM