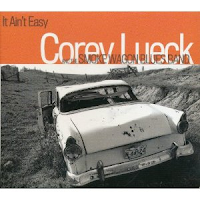 
Canada produces some of the finest blues artists in the blues world. Names like Colin James, Powder Blues, Jeff Healy, The Downchild Blues Band, and contemporary artists like Sue Foley and JW-Jones have become prominent figures connected with the blues scene.


Flying under the radar since 1997, the Southern Ontario group Corey Lueck and The Smoke Wagon Blues Band has released their third CD It Ain’t Easy. Of the 15 tracks, Corey has co-written all but one with the guitarist Mike Stubbs. The cover song on the CD is the slow blues tune "Ain't No Use" by Rudy Stevenson, featuring a superb piano performance from Jesse O'Brien and equally good guitar riffs from Mike Stubbs. The rest of the songs are all original tunes played by a seasoned group of blues veterans. Corey's vocals have that gritty, smoky, raw sound of Joe Cocker or Murali Coryell.


The steady rollin' tune "Devil Got My Woman," the funky original "Drinking Hard And Steady,"  and New Orleans tempered song "Tongue Tied" feature superb cameo performances on saxophone by Gordon Aeichele. Aeichele also has solo saxophone spots with a complete horn section background on "Fine Furred Momma." "Where Did I Go Wrong" is a special treat, featuring the sweet vocals of Robin Banks complimenting the entire band. Guitar solos, keyboards, harp, in addition to the full horn section of the Kingston St. Quartet, make "Down Hearted Blues" one of the standouts on the album. Lueck blends both vocals and harp into a slow, symphonic background on the tune "Hold On To You." "Josephine" is a blend of funk, with the ambience of the delta created with a dobro guitar from Mike Stubbs. The tongue-in-cheek "Hen House Hopping" is a little more on the lighter, humorous side. "That Voodoo" will find you deep in bayou, this time with Robin Banks and Corey Lueck sharing the vocals on this swamp blues track. The title track "It Ain't Easy," "Some Other Fool," and "Damaged Time" are a slower tunes with smoother vocals about a relationship in the past. It Ain’t Easy concludes with a very roots sounding tune with Mike Stubbs again on the dobro guitar and Corey wailing on his harmonica, echoing blues artists Moreland and Arbuckle.


After listening to this CD, you will find Corey Lueck to be a very accomplished harp player with a perfect, whiskey soaked blues voice. It offers a multitude of blues styles created by an all-star cast of Canadian artists.

Posted by Crossroads Blues Society at 3:46 AM