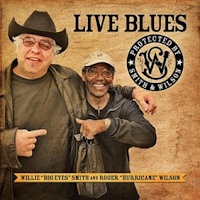 “Live Blues Protected By Smith & Wilson” is a read deal acoustic blues CD featuring two outstanding blues artist. The late Willie “Big Eyes” Smith, long time drummer for the Muddy Waters Band, plays blues harmonica as well as giving us his vocal take on blues tunes that we all know. Joining him on this live show recording is Roger “Hurricane” Wilson. Roger is a very proficient finger picking guitar player as well as being very capable of carry out vocal duties on several tunes. Both musicians on this CD write very interesting and heartfelt lyrics on several tracks also. The 12 tracks on this recording are a mix of Sonny Boy Williamson, Muddy Waters and Slim Harpo tunes as well as Smith and Wilson songs. There is something for everyone mixed into this CD. These songs all feature both artists doing their best blues vocally and instrumentally.

Opening the set with Sonny Boy Williamson’s “Eyesight To The Blind”, “Big Eyes” blows solid blues harp with great feeling and  timing as well as inserting his own style to honor previous masters of the harmonica. His vocals also have their own qualities which have that certain roughness and grittiness that we want to hear with the blues. Roger shuffles along with his guitar picking his way down the blues highway with Willie. This is an ear opening tune that takes us into the world of real acoustic blues. Willie’s “Born In Arkansas” is an upbeat tune with more awesome harmonica playing which shows a different dimension of his harp style. Willie states, “I was born in Arkansas,  raised on a country farm and had to work my way up North to make good.”  This is the blues. Wilson also plays some strong finger picking guitar for us.

“You Do Your Job” is a fun tongue in cheek song written by Roger Wilson. He states that he has been doing his job for a long time and that I don’t tell you how to do yours, so don’t tell me how to do mine.”Big Eyes” chugs along on harp as Roger is picking his guitar. The harmonica solos on this track are very interesting as well as unique. This is a real strong tune on the CD. A favorite track on this recording is “Dreamin’” which is an instrumental featuring Willie’s chromatic harmonica talent. This is a real deep slow blues number played with strong emotion and great tone as well as timing. This is a track for you harp fans to listen to. “Hurricane” rides along on this one on his guitar paving the way for Big Eyes’ blues. This is really a strong tune for the CD.

With tunes such as “Scratch My Back”, “Can’t Be Satisfied”, and “Long Distance Call” included on the play list as well as tunes from both Wilson and Smith this is a CD to be listened to over and over. Both of these blues artists brought their own take and feelings to all of these tunes making them stand out even more.  For acoustic blues fans and blues fans not really familiar with them, “Live Blues Protected By Smith & Wilson” is a powerful recording to listen to. This live show is truly a hit and a great tribute to Willie Big Eyes” Smith. Thanks to Roger “Hurricane” Smith for putting this recording together and preserving it for all of us blues fans.  www.cdbaby  or www.hurricanewilson for CD.

Posted by Crossroads Blues Society at 3:51 AM