The No Refund Band reviewed by Steve Jones 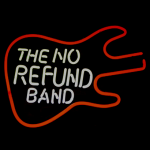 Never judge a book (or a CD) by its’ cover.  I saw this, the band’s name surrounded by a guitar body in a neon sign look on a black background.  Not too way out, not big budget.  There’s some familiar covers listed, some original stuff.  I admit I underestimated this from the start.  I threw it in the CD player and was immediately wooed by Ricky Jackson’s vocals.  He’s got a style that grabs you– real, authentic, emotive.  Great pipes.  And then you ad he and Mike Crownover on guitar, Rik Robertson on bass, Walter Cross on drums and a horn section of diamond Juim Brady and Anthony Terry, Travis Doyle on B3, Randy Whal on piano, James Metcalf o n congas, Tyson Sheth on percussion, and Max Dyer and Aleph Yonker on strings and you have an amazing, big sound.

“Eleanor Rigby” is one of the covers.  A little schmaltzy and over done, but they sold me.  The only other bluesman to do that on this song was Mem Shannon.  I could have done without some of the echo, but it’s pretty neat and full of feeling. “Never Been to Spain” takes the Hoyt Axton song where Three Dog Night did not; it goes to a gritty and grungy place, with dirty vocals and Terry on the sax and the guitar just laying it out.  Warren Haynes’ “Soul Shine” is a number I usally only want to here Haynes and Gregg Allman do.  They pull it off, with Jackson up front and Tommie Lee Bradley backing him vocally (she can growl right along with Jackson) and a nice B3 line throughout with guitar and sax solos also selling it.  They close to “Willie the Wimp,” and while it might not be like SRV it is cool with the trumpet and horn and the “No Refund” sound.

“Got Whiskey” opens with a drum solo and gives us the band’s feelings about how they like 80 proof, golden stuff, grooving and beating it out.  They follow it up on the theme with “One More Drink,” changing it up with acoustic guitar and hearing the lament of someone who wants to go home feeling less of life’s pains.  “Blues is My Business” is the opening cut, and as I said it grabbed me.  Jackson and company are sort of the Grand Funk RR meet Chicago done up in Texas blues style.  Big, ringing guitar sounds, smooth  yet gravel toned vocals, a big beat and heavy instrumental backing

Some nice originals and covers that are fun, moving, danceable and just good listening.  I was impressed with these guys (and gal); the No Refund Band exceeded my initial expectations and I recommend this to blues fans who like to hear blues with a big sound!