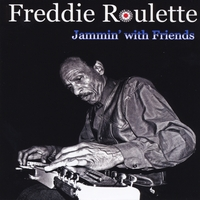 Most area blues fans have never heard of Freddie Roulette even though he gtrew up in Evanston and was part of the unheralded band that backed up guitarist Earl Hooker in the late 1960's. Roulette played his lap steel guitar alongside Pinetop Perkins on piano, Carey Bell on harp plus Andrew Odom on vocals on what was possibly the pinnacle of Hooker's recorded legacy, Two Bugs & a Roach. Roulette also did a stint in Charlie Musselwhite's group. He later made the move to California and released Sweet Funky Steel, the first record under his own name. More than thirty years later, Roulette's latest project is the seventh bearing his name. The title is certainly appropriate given the number of musicians and singers joining in on the fun. The core band includes Michael Warren on bass, Rich Kirch on guitar and producer Michael Borbridge on drums & percussion. Four other guitarists make appearances including Harvey Mandel on six tracks and Barry Melton (Country Joe & the Fish) on one song.

The disc opens with “Directly From My Heart to You” as Roulette spins a web of bright, metallic tones around the late Kathi McDonald's huge voice. David LaFlamme, founder of the band It's A Beautiful Day, follows a shimmering solo from the leader with a  slow-burning excursion on his violin. Roulette picks out a nimble-fingered solo to start off “It Hurts Me So”, then McDonald growls her way through the slow blues supported by Terry Hanck and Bernard Anderson on sax. Roulette shows off his vocal skills on “Key to the Highway” and “Need Your Loving”, taking a laid-back approach on both.

The pedal steel fills “Killing Floor” with a variety of other-worldly sounds that are tempered by the sprightly keyboard work from Pete Sears (Jefferson Starship) in support of Davey Pattison's robust vocal. The singer is a bit more subdued on “Reconsider Baby” but Roulette and Mandel engage in a aggressive exchange of six string talents. The band shifts into a funk mode on “Wrapped Up in Love Again” as Rick Baskin's harp play off another hearty dose of Roulette's engrossing work. Kirch gets his moment in the spotlight on “Flip, Flop and Fly”, opening with a blazing guitar solo. Once Cobb finishes the first verse, Sears and Roulette burn through a fast-paced musical dialogue.

And of course, there are a couple of instrumentals. One listen to “Mojo” is all it will take to make you realize that Roulette has chops to spare. “Funky Chicken” delivers exactly what it promises with Sears. Roulette and LaFlamme trading licks over the hearty blasts of approval from the horns. It adds up to another solid effort from a musician who deserves wider recognition. There aren't many people playing blues with a pedal steel guitar. If you want to hear how it's supposed to done, this is the place to start!