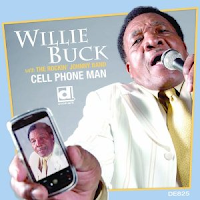 Veteran singer Willie Buck adds another chapter to the resurgence of his career with a recording that builds on the momentum generated by his 2010 release on Delmark Records, The Life I Love. His latest mixes seven original songs with a variety of covers that include five written by Buck's greatest influence, the legendary Muddy Waters. After raising his family and supporting them primarily as an auto mechanic, Buck is ready to share his talents with a wider audience. He did make an occasional club appearance over the last three decades but only the most die-hard blues fans had ever heard of him, let alone actually heard him singing live or on record.

If it is true that we are judged by the company we keep, Buck scores high marks for the outstanding group of musicians that help him out on this project. Every one of them is well-versed in the traditional Chicago electric style, starting with the twin guitars of Rockin' Johnny Burgin (who co-produced the disc with Delmark’s Steve Wagner) and Rick Kreher (who played in Muddy Waters’ band). Barrelhouse Chuck Goering studied with all of the great Chicago blues piano players and his playing testifies to the fact that he learned his lessons well. The rhythm section of John Sefner on bass and Steve Bass on drums is rock-solid. Bharath Rajakumar and Martin Lang may not be names that spring to mind when you think about harp players, but both offer proof that they deserve wider recognition.

Buck's voice rings out loud and clear throughout the disc -- gritty one moment before slipping into a soulful lament the next. His feelings of resignation are apparent on the opener, “Doin' Good and Bad at the Same Time” while the title track finds him attempting to incorporate modern technology in his pursuit of a love interest. Other originals like “I Want My Baby” and “Two Women Talking” find Buck applying new lyrics to familiar blues progressions. He sings with unerring frankness on the first tune while Barrelhouse Chuck's hands dance across the keyboard. The second number finds Lang and Goering weaving together rich fills behind Buck's powerful voice.

The longest cut, “Strange Woman” is the first of the Muddy Water's tunes that the band tackles. Buck adopts some of his mentor's vocal qualities, Rajakumar wails on his harp and Burgin impresses with his distinctive guitar playing. Goering’s spirited efforts on “Going Down Main Street” are another highlight, followed by Buck's emotionally-charged rendition of “Streamline Woman”. Burgin switches to acoustic guitar for a stripped-down version of “Two Trains Running” that keeps the focus on Buck's raw voice. A second acoustic track, “I Wanna Talk to My Baby”, is in a similar vein with another potent effort from the singer. The disc closes on a high note as once again the band unites as a tight ensemble behind Buck for a hearty run-through of “Blow Wind Blow”.

Add this one to recent recordings from Mud Morganfield and Taildragger that show there is still plenty of life left in the old-school styles, especially when the music is entrusted to musicians with a deep love of the roots. Willie Buck understands because he was there back in the 1950s, experiencing the power of Muddy Waters, and other pioneers, live in the flesh. He honors their legacy with this unembellished update that never strays from the traditional sound – and is well worth a listen.

Posted by Crossroads Blues Society at 3:53 AM