Too Much Jesus (Not Enough Whiskey) reviewed by Mark Thompspn 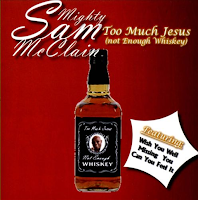 When he first came to prominence in the 60's, Mighty Sam McClain joined a long line of talented soul and blues singers like Solomon Burke and Bobby “Blue” Bland. He scored a major hit with a cover of Patsy Cline's “Sweet Dreams” along with several records that made a dent in the charts. But McClain wasn't able to keep things rolling along and he eventually slid into a hand-to-mouth, homeless existence until the Neville Brothers reached out a helping hand and started McClain on the road recovery. Since 192, the singer has released more than a dozen recordings that consistently garnered effusive critical praise and numerous blues award nominations.

His latest project continues the winning combination of McClain's passionate vocals complimented by his razor-sharp band that excels at a variety of styles. The band's leader, guitarist Pat Herlehy, wrote all of the arrangements and collaborated on the horn charts with sax player Scott Shetler. Herlehy is a multi-talented musician as witnessed by his contributions on tenor sax, flute, Clavinet, Hammond B-3, and percussion. He also co-wrote all but one song with McClain. The other band members include Chad Owen on bass, Rick Page on drums, Joe Deleault on keyboards, Russell Jewell on trombone and Grayson Farmer on trumpet.

McClain has always had a creative vision that allows him to concoct engrossing frameworks for his on-going exploration of of the familiar themes of love, loss, God and maintaining a caring spirit. The funky “Rock My Soul” finds McClain excitedly expounding about his new love interest. Herlehy's taut guitar opens “Stand Up” over a strong horn chart before McClain issues to rousing proclamation for everyone to reach out a helping hand. “Wake Up Call” centers on  the need to get things right before God's return. As you listen, notice the expert phrasing McClain utilizes as he easily switches from a sweet plea to a gritty shout without missing a beat.

Other highlights include the riveting ballad, “Tears”, with McClain making a stark plea for forgiveness with special guest Conchetta on backing vocals and “Real Thing”, which McClain wrote with Allen Toussaint that is sparked by some muscular sax from Shetler. The title song is potent admission that a measured approach is best in all things. Equally fine is the swaying rhythm on “I Wish You Well” and McClain's sorrowful confession regarding the end of a relationship on “ Missing You”. Even a generic number like “Dance” will have you up and moving in short order as the band sets up an infectious groove.

Mighty Sam has not lost a thing over the years. He remains perhaps the finest living soul singer from a by-gone era. And don't be put off by the religious references. McClain is one of those vocalists that could sing the phone book and make it exciting. With the support of his fine cast of backing musicians, he has fashioned another in a long line of soul/blues gems. Definitely recommended!


Posted by Crossroads Blues Society at 3:48 AM