Self Made Man reviewed by Harmonica Joe 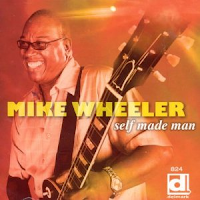 “Self Made Man”, released by Delmark Records, features outstanding blues guitarist Mike Wheeler. He has been on the Chicago blues trail for over 30 years. He has toured and recorded with Cadillac Dave, Big James and Peaches Staten just to name a few. Having been the leader of his own band for 10 years has lead to the production of this CD. Wheeler surrounds himself with a very strong and dedicated band which features multi genre keyboardist Brian James, Larry Williams playing straight forward blues bass and Cleo Cole doing a strong job on solid Chicago style blues drums. Also added to the lineup is Omar Coleman bringing his own awesome harp playing into the mix on 3 tracks.

All of the songs on “Self Made Man” were written by Wheeler, Williams, Cole and Vollriede except “I’m Missing You” penned by Wheeler and “Let Me Love You” by Willie Dixon. These are all varied and well done tunes. Wheeler’s songs do not just linger on the old style drag down depressing  blues that we all know and respect. He incorporates more current upbeat subjects that are relevant today and get the attention of the next generation of blue fans also. We need this style to keep the blues alive and to grow.

Opening this recording is “Here I Am” which right from the start showcases the whole band and sets the mood for the rest of the CD. Brian James leads us into the song with his solid keyboard playing as the bass from Williams and Cleo Cole’s drum beat all lead the way letting Wheeler walk in with his guitar skills. Mike is one of the most tasteful smooth players as he takes his time and puts feeling and depth into every note that he plays. His solo on this song is outstanding and shows us that he has learned to play the blues. Mike’s vocals feature that strong blues tone as well as allowing us to hear and understand all of the lyrics. He is very easy to listen to and enjoy the blues stories told.  Also this track features Brian James with his really outstanding keyboard work.

The title tune, “Self Made Man’, opens with a hard charging drum line from Cleo Cole along with a searing guitar lead from Wheeler. This is a strong statement as to the strength of this tune. Omar Coleman jumps in with strong harmonica background playing. This is all good stuff for the ears. “I’m a self made man and made myself get the blues” is a great line that takes us to the story of a love gone bad with no one to blame but himself and he just as well blow off his job as well. This is really a story of the blues. Wheeler’s guitar solo is also one of those top notch one’s that just twist your ear to get the full effect from it.

Mike Wheeler’s “Self Made Man is filled with one hour of real Chicago blues relevant to our times and performed by a band that is really outstanding.  Mike Wheeler is a blues artist that plays guitar, sings and writes lyrics with a deep passion for the blues. Delmark Records seems to have the skills to find and record blues artist that we need to keep genre moving forward and alive. Mike Wheeler and “Self Made Man” are fine examples of this.