Christmas With The Blues reviewed by Rick Davis 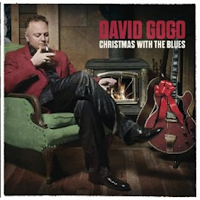 Born in Nanaimo, British Columbia, Canadian blues-rock artist David Gogo started his professional musical career at the age of 16 with his first group the Persuaders, opening for groups like Johnny Winter, Buddy Guy, Albert Collins, and The Fabulous Thunderbirds. Over the years, he has several electric and acoustic blues guitar albums to his credit.

Gogo recently released his Christmas album which is a follow-up to his 2011 release Soul Bender. The 2011 release was a Juno nominated and WCMA award winning album. David is no stranger to Canadian Blues awards. Prior to the release of Soul Bender, David had three Juno nominations, was a two-time Maple Blues Guitarist of the Year, was awarded WCMA Musician of the Year and received the Saturday Night Blues' Great Canadian Blues Award for a lifetime contribution to the blues in Canada. The Toronto Blues society has recently nominated Gogo again for Guitarist of the Year at the 2013 MBAs (Maple Blues Awards).

Christmas With The Blues is a collection of blues saturated Christmas standards and two original tunes. It opens with a very soulful tune "Christmas Blues." He then takes you south to the bayou with "Christmas On The Bayou," trading in his sugar plums for some crispy catfish and cornbread. In a traditional B.B. King style guitar, David informs us that on the outside he is crying "Christmas Tears." Growing up on a Christmas tree farm, it is a tradition in his family to get a real tree. "Let's Get a Real Tree" incorporates a Jimmy Vaughan, Texas style guitar along with a Chuck Berry groove. Sitting by the fireplace, you can listen as the band brings in saxophone solos for the slow, soulful arrangement of  "Please Come Home for Christmas." Gogo brings his fiery guitar style center stage on "Santa Claus Is Back In Town." You can hear the Albert Collins guitar influence when you listen to "Merry Christmas Baby." "Little Drummer Boy" is done as a very traditional delta style instrumental. The album concludes with David playing cutting edge guitar on "Santa Claus Wants Some Lovin'."

This collection is a great mixture of traditional roots and Cajun blues simmered with old style rock 'n' roll, showcasing the superb vocals and guitar of David Gogo. It is an album you will want to put on your Christmas list this year.