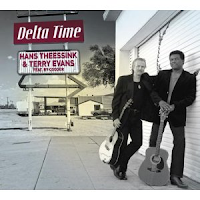 It's a strange combination – a Dutch guitarist who learned the blues from listening to old records of the legendary acoustic blues singers and a Mississippi-born singer who grew up in the church before gaining recognition doing backing vocals on Ry Cooder albums. Their first duo project, Visions, was nominated for a Blues Music Award and garnered plenty of critical praise.

Their latest effort leads off with title track, one of five Theessink originals on the disc. Evans use his electric guitar to lay down a strong rhythm line and Hans uses overdubs to add acoustic slide guitar and mandolin parts. Theessink takes the lead vocal, his resonant baritone voice creating a powerful presence. When Evans joins in along with his long-time singing partners Arnold McCuller and Willie Greene Jr., the track becomes a joyous celebration of the quiet country lifestyle.. Theessink's foot supplies the steady pulse on “It Hurts Me Too” as he and Evans take turns handling the lead vocal. There is also a nice exchange between the acoustic guitar and mandolin.

“I Need Money” establishes an infectious pace with Evans soulfully relating the details of his precarious financial situation. Even better is the duet on the James Carr classic, “Pouring Water on a Drowning Man” with Theessink's deep tones seamlessly mixing with Evan's honeyed voice. The duet format is employed again on  “Honest I Do” to a similar effect. Minus the usual upper register harp squeals, the delicate interplay between the two singers commands your full attention.

“Build Myself a Home” is another Theessink original, yet it perfectly captures the feel of a old traditional gospel hymn with his half-spoken vocal surrounded by the glorious harmonies of the backing trio. The Jewel Aiken's hit “The Birds and the Bees” seems like an odd choice to cover until you read that Evans sang backing vocals on the original. All of the voices join together on Theessink's stirring arrangement of “Heaven's Airplane”.

Evan's former employer appears on three cuts. He adds his trademark slide guitar licks on the Delmore Brothers classic, “Blues Stay Away From Me”. Evans and Theessink trade vocals once again on a revved up version of “How Come People Act Like That” with Cooder leading the way. The longest track is also the most intense performance of them all. Evan's give a chilling accounting of racism in the South on J.B. Lenoir's “Down in Mississippi”, then finishes with a burst of gospel intensity with Cooder's slide guitar weaving its own spell-binding tale throughout the nine minute run time.

This recording is one of those little gems that come around every so often. Theessink, Evans and a few of their friends turn in one memorable performance after another simply by using the power of the human voice and a few stringed instruments. They mine the enormous depths of human emotions without sacrificing the back-porch feel that permeates every track. You don't want to miss this one – which comes highly recommended!!