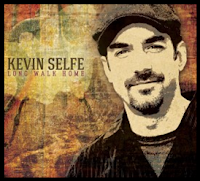 A move to Portland, OR six years ago has really paid off for guitarist Kevin Selfe. Along with his band, the Tornadoes, Self quickly became a fixture on the Northwest scene, winning a number of area blues music awards and capturing plenty of accolades for his Playing the Game release. With the backing of the Delta Groove label, Selfe is looking to reach a larger national – and international – audience.

Selfe plays guitar and handles the lead vocals. He also wrote all of the songs and served as the Producer for the project, using the studio that drummer Jimi Bott built in his home. Allen Markels is the other half of the strong rhythm section. Veteran Gene Taylor appears on four tracks on piano. The same tracks are bolstered by a horn section comprised of Joe McCarthy on trumpet, Chris Mercer on tenor sax and Brad Ulrich on baritone sax.

There is plenty to like, starting with Selfe's commanding performance on “Mama Didn't Raise No Fool”. Doug James' honking baritone sax props up the low end, Steve Kerins fills out the arrangement on piano and Mitch Kashmar blows a memorable acoustic chromatic harp solo. But it is the leader's brawny voice and gut-bucket guitar that make the biggest impression. Tracks like “Duct Tape on My Soul” and “Moving Day Blues” show display a strong T-Bone Walker influence, robust horn charts and smooth vocals. The later track is another highlight as Selfe's penetrating guitar licks ride the riffing horn section, building the slow blues to a cathartic finish.

Bott lays down a swinging shuffle beat on “Walking Funny” as Taylor rocks the 88's. The horns get to stretch out a bit on “Second Box on the Left” as Selfe's deep voice articulates the hard times that befell him after losing his job. Selfe plays acoustic slide on a resonator guitar on “The Blues is My Home”, singing with unerring frankness about the music he loves. The frantic “Last Crossroads” is less effective in the acoustic format despite Bott's sure-handed work. Despite Selfe's spirited efforts, the track is weaker lyrically than the rest of the program and fails to impress.

Selfe regains his footing on “Dancing Girl”, utilizing a guitar lick from “Lonely Avenue” to set-up another solo full of cascading runs up and down the guitar neck. He generates a raw, menacing electric slide tone on “Midnight Creeper” as Bott once again kicks things into gear. Kerin's piano propels the first half of the closing track, “Put Me Back in Jail”, before Selfe tears it up on slide on a tune that reworks “Give Me Back My Wig”.

One listen to this recording will make it clear that Kevin Selfe is a very talented musician. At times the disc could use a bit more greasy textures as some arrangements are spot-on recreations of music of by-gone eras. But Selfe avoids cliches, demonstrates his versatility and ends up with a recording that warrants your consideration. We will be hearing a lot more from him down the road.