I Want It All reviewed by Mark Thompson 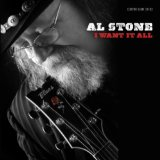 I Want It All

“Not Your Everyday Blues” is the motto that appears on the business card for the Electro Glide Records label. Based on the material on their latest release, it appears that the company is looking to make its mark in the land where straight blues progressions take a backseat to the higher energy and driving beat of the music’s rock influences.

Guitarist Al Stone has playing music for more than four decades, establishing his blues roots in his hometown of Chicago before hitting the road and eventually settling in the Florida panhandle with Jacksonville as his home. He is the primary vocalist, with backing vocals from Debbie Bailey Rider of the Lynyrd Skynyrd Band. Stone also handles the lead and rhythm guitar parts while Erik Guess contributes some fine slide guitar work throughout the disc. Banner Thomas of the Molly Hatchet Band is the bass player on nine cuts with Danny Best on drums filling out the rhythm section. Additional musical assistance comes from Robbie Morris on percussion and Rob Peck on harmonica. The attractive packaging was designed by Kate Moss at Moonshine Design.

The program of all original material employs standard blues themes like fast cars, cheating women and too much alcohol. Stone sets a blistering pace on “Pontiac 4 Door”,, as he describes watching his wife drive off in his dream car after a disagreement and trying to decide which one he misses more. The title track finds Stone expressing his desire for ’59 Cadillac convertible, complete with a fine looking woman and a bottle of Jack Daniels. Stone and Guess both turn in hot guitar solos.

Things slow down on “Blind Dog” with Stone’s world-weary vocal telling the tale of getting kicked-out to the street without a home for him and his old dog while Peck gets a chance to stretch out on his harp. The band rocks hard on “She’s Gone” and uses a fast shuffle beat on “Drunk Again”, with Stone lamenting that he no longer can figure out if he is drinking whiskey or wine. “The Captain” is a ballad that succeeds due to Stone’s understated vocal.

Stone goes deep into the blues on “Old #9”, incorporating the train theme into his bitter tale of escaping the aftermath of romantic betrayal. Then the band erupts as the energy level skyrockets on “Don’t Try to Change Me”. Stone’s measured vocal is complimented by Rider’s spirited backing singing. The guitars join together to form one hellacious groove. Just as good is the closing track, “Walking Cane”, that opens with Stone’s distorted voice over a slide guitar. Once the band kicks in, Guess wails away on the slide guitar and Matt Marseglia delivers the strong beat that drives the track.

If Stone can manage to cut an entire disc of performances as strong as the last two on this recording, he would definitely live up to the Electo Glide motto of creating something beyond ordinary. The band can really rock when they cut loose. The other performances may not match the intensity of these songs but still serve to present Stone as a talented singer, songwriter and guitarist, one worth checking out listeners looking for a healthy serving of blues ala rock & roll.
Posted by Crossroads Blues Society at 11:01 AM

Mark Thompson, Thanks for reviewing my CD " I Want It All " I am no longer associated wit EGR, Due to a contractual dispute, also, I am the slide guitar and only guitar player on the song, " Walkin Cane ", and play all the slide guitar stuff at live shows great review thanks, and I love your site, ..Al Stone
http://alstoneblues.com