Who I Am & What I Do reviewed by Steve Jones 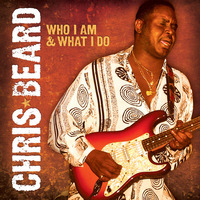 Chris Beard is a great guitar player who sings well and produced a “big” sounding CD here. Fans of Ronnie Baker Brooks will eat this CD up. The production, songs and style of this CD hearken to the sound Ronnie gives his CDs; he even wrote or helped write four of the songs. Big, driving beats with guitars layered on the bass line with familiar riffs from softer ballads through the funky, rocking stuff.

The Syl Johnson’s “Gotta Find My Baby is a wailingly good time. He picks and bends some mean stuff here on his guitar. His straight up blues like this, “Tied Up, Down and Twisted”, “The Blues is My Livin’” and others are delivered with precision and soul– these are my favorite tracks.

The title track is a soft and mellow ballad. Beard offers up a few slow cuts. He pulls off the slow stuff fairly well, but sounds better on the “bigger cuts” where his guitar and vocals are predominant. The vocals are a little sing song sounding here and there on some tracks, but that is not a huge problem overall.

Beard also ventures out into funky stuff that is more “out there” (as does Ronnie Brooks) and pulls it off well, but his money stuff to me is straight blues. He’s got a great tone when he plays them and his vocals seem most comfortable when he got the blues.

This is a nice CD with a lot of new stuff and some good covers. The CD is well-produced and the sound is clean and balanced. Beard’s fans will love it and blues fans in general will appreciate his style and sound!
Posted by Crossroads Blues Society at 2:06 PM