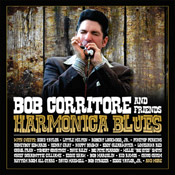 Bob Corritore’s latest release from Delta Groove Music, “Bob Corritore And Friends Harmonica Blues”, is very exciting to me! This CD is over one hour of Bob Corritore’s harmonica talent being showcased on 15 tunes with 14 different blues singers. Also we are treated to a great instrumental track, “1815 West Roosevelt”, featuring Eddie Shaw on the saxophone. What a treat this track is.

If you are not familiar with the name Bob Corritore, this recording will make you know who he is. He is one fine understated, underrated harmonica player! For about 40 years he has been playing harmonica with just about anyone that plays or sings the blues. He is a very traditional, old school blues harp player. Do not look for the Jason Ricci style here. That is great stuff also. He has developed his own style with great tone, which is an essential part of blues harp. Bob’s style can be said to be somewhat understated but always tastefully present.

Corritore is very successful at being a blues artist. Besides recording and performing the blues he also owns his blues club in Phoenix, AZ, The Rhythm Room, has a weekly blues radio show and sends out a blues newsletter on the internet. Bob is dedicated to the blues.

The lineup of blues singers on this project is like a list of blues history. Starting out with Koko Taylor’s, “What Kind Of Man Is This?” is a great start. Koko’s heavy vocal style and Bob’s harmonica just compliment each other all the way through this tune. Not to list the entire vocalist on the recording does not seen fair. When you have a list including Louisiana Red, Eddy Clearwater, Dave Riley, Honeyboy Edwards, Nappy Brown and Big Pete Peterson you realize why I say this. You know that this CD is serious blues material!

“Big Fat Mama” with Pinetop Perkins on piano and vocals is a standout tune on this CD. How do you go wrong with lyrics such as, “big fat mama with meat shaking on her bones”? Who would we offend with this line of thought? Pinetop plays some great piano on this track and with Bob’s harp solo this is a fine tune.

Also included in the list is Chief Shabuttie Gilliame with Kid Ramos doing “No More Doggin’” and “Bumble Bee’ with Honeyboy Edwards to name a couple. The great artist on this disc just goes on and on.

You do not have to just be a fan of blues harmonica to enjoy Bob Corritore’s Delta Groove CD, “Bob Corritorre And Friends Blues Harmonica”. This recording is truly a blues lover’s CD to listen to. From the start to the finish it is all about the blues and how blues should be felt and played. There is not one bad or iffy tune on the project, check it out.
Posted by Crossroads Blues Society at 2:04 PM