Addicted to the Blues reviewed by Mark Thompson 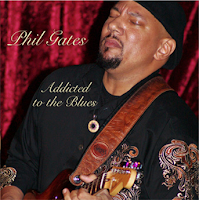 Addicted to the Blues

Originally from Chicago, Phil Gates has spent the last twenty years in the Los Angeles area. His latest is his fifth independent title in the last decade. It features Gates on lead vocals and guitar on an all-original program. The unusual part of this recording is that Gates also handles the bass and keyboards on most of the tracks while also setting up the drum editing. Guest musicians appear on five songs plus backing singers are added on the final song. So the success or failure of this recording rests squarely on the shoulders of Mr. Gates.

As a guitar player, Gates has a clean tone and a light touch, able to navigate the fretboard with speed and dexterity when appropriate. His singing voice is equally smooth, although he can add a harder edge as he does on “My Babe”, a tune that describes a great woman and features some of Gates’ dynamic guitar work. “Addicted to the Blues” provides Gates with the opportunity to relate what blues music means to him over a modified “Spoonful” lick. He switches to slide guitar to highlight “Sexy Little Cool”, a shuffle hat is fleshed out by some keyboard work from the leader.

The pace picks up on “End of Time” with Gates’ voice taking on a raspy quality as he tries to match the intensity of the Texas shuffle. Once again he lays down a fine guitar solo the simmering organ accompaniment. Gates is effective when the tempo slows, as witnessed by his handling of “You Should’ve Listened” as he tries to get a woman to benefit from his life experiences. On “Evening Train”, uses a common blues theme to relate some of the feelings of a disassociated factory worker. “Road Shufflin’” gives Gates three minutes to spotlight his guitar abilities. The swinging tempo of “I Never Knew” proves to be a bad match as Gates can’t muster the vocal skill the song requires.

Gates is definitely talented in a variety of ways. Perhaps his one mistake on this project was the decision to use programmed drum tracks rather than the real thing. The rhythms often have a static feel to them, lacking the feel a live drummer can supply. But overall, Gates pulls off this one-man project with a solid effort that should raise his profile. Hopefully his next release will show us what he can do with a full band backing his impressive guitar.
Posted by Crossroads Blues Society at 12:59 PM