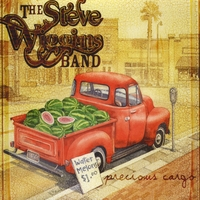 This is the kind of CD you buy at the end of a live concert hoping to capture some, if not all, of the good time you had. But like so many CDs we have all bought, it just doesn’t come alive. Ten of the 11 tracks on this CD are the SWB live in Panama City, Florida. Wiggins plays keys over and above the call of duty (see more later). He is aided by bassist Bruce Hebert, saxman Wally Trado, and drummer Leonard Cherry, Jr. I tend to gripe a lot about today’s blues guitar players overplaying songs to the point where lyrics are just a bridge to the next long solo. Steve Wiggins sort of made me long for a guitar album. He is definitely a “more is more” keyboard player. His style is firmly rooted in Boogie Woogie/Honky Tonk, but he doesn‘t know when to let up. He aptly switches between piano and organ but rarely uses chords to any effect. His fingers dance all over the keys, which isn’t necessarily a band thing unless it starts to make you head numb. His partner in crime on this CD is drummer Cherry, who is a bit heavy handed.

The CD boasts three instrumentals” “Steve’s Boogie,” “Roosterfish” (both Wiggins’ compositions), and a reading of Herbie Hancock’s “Watermelon Man.” The latter ropes in Wiggins a bit by its emphasis on melody and groove. He still manages to add more notes than the song calls for. Another problem I have with the CD is the vocals. Wiggins takes on John lee Hooker’s “Dimples” providing one of the worst readings of this song I’ve ever heard. To compound things, bassist Hebert tackles an almost note-for-note (sans guitar) reading of SRV’s version of “Cold Shot,’ that will send you the liquor cabinet for a double shot. To say it’s lackluster is giving it too much credit. This song is followed by Hebert, again burying James Taylor’s “Steam Roller” in a steamless version that even if you where there, you think, OUCH. Drummer Cherry handles the rest of the vocals; and thought he’s a stronger and WAY more soulful singer than Wiggins and Hebert, only rises to the occasion of an OK vocalist. His personal reading of Bill Wither’s “Ain’t No Sunshine,” seems to plod too much for the effort he puts into it. Cherry’s “Black Cat Woman,” fairs no better. Wiggin’s composition, “My Last Tear,” has little in the way of lyrics, like his “Doing My Thing” (live and studio versions), and structurally just ‘Stormy Monday” with different lyrics.

Tacked on to the end of this CD is a studio version of “Doing My Thing” which adds the guitar of Ted Shumate (he adds little) and the Jack Bruce-like bass style of David Goldflies. Sonically, this song isn’t as crisp as the live version, but gets a slight boost from bassist Goldflies and drummer Cherry.

I wish I had more to recommend here. Wiggins sure knows his was around a keyboard, but writing is weak, and the performances aren’t saved by his two-handed assault. Again, I think even purchased in the heat of the moment at the show, this disc probably won’t readily capture the moment.
Posted by Crossroads Blues Society at 11:04 AM

Hmmmmm, one bad review out of dozens of great ones is not so bad I guess. At least you could have used correct spelling.(David, you prob. are a guitar player and not a journalist). One more thing, the link you put down goes to nothing,
so here is the correct link, for others to listen and gain their own opinion...www.reverbnation.com/thestevewigginsband