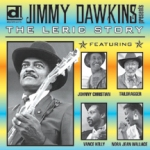 Guitarist Jimmy Dawkins decided to start his own record label in the early 1980’s to document the undiscovered talent in the West and South Sides of Chicago. Dawkins had paid attention to the details of his own career and felt he had acquired the knowledge needed to make his Leric label a success. The business plan was to record some of the artists making a name for themselves in the city’s still vibrant blues club scene or lease undiscovered records from producers who lack the means to get their records in front of a wider audience. Blues records were still getting radio airplay in Chicago at that time, so Dawkins concentrated on turning out 45’s that could garner airtime and also find a home on the jukeboxes in all of the clubs.

This compilation of the Leric recordings certainly illustrates the quality of talent that was available and highlights Dawkins ability to identify performers who had staying power. Tail Dragger has received acclaim in recent years for his deep, raspy vocals and animated stage presence. He is featured on two tracks with strong backing from Eddie Burks on harp, Johnny B. Moore on guitar, Lafayette Leak on piano and Willie Kent on bass. “So Ezee” is an up-tempo workout and “My Head is Bald” is Tail Dragger’s original version of one of the signature tunes in his repertoire. Delmark Records is planning on releasing all of the tracks from this session in the near future. Given the fine performances on these two cuts, that release should be a real treat.

Another mainstay of the current Chicago scene, Vance Kelly, is featured on three previously unreleased tracks. “Use What You Got” has a healthy dose of his biting guitar style. The instrumental “The Jam” is a soul-jazz piece with some nice tenor sax courtesy of Kreen. His final song, “Why You Hurt Me So Bad”, is one of the highlights of the collection with a spirited vocal from Kelly.

Little Johnny Christian never was able to get a break before his untimely death in 1993, ignored by all of the major labels despite his obvious talents. His tough vocal on “New Life” rides over the horn-driven accompaniment. “Luv Somebody” sports a funkier beat with Michael Coleman on guitar. It’s hard to fathom why Christian’s exceptional vocal on “Ain’t Gonna Worry About Tomorrow” didn’t have the blues labels fighting to sign him to a contract. The companion track, “I Gotta Sad Feeling” suffers from a slightly out-of-tune horn section but these two cuts feature the first recorded performances from the late guitarist Chico Banks.

Robert “Big Mojo” Elem was playing bass for Freddie King in the early stages of that guitarist’s storied career. His lone cut, “Special Kind of Love”, provides a brief glimpse of his energetic vocal style, again with Dawkins on guitar.

Dawkins didn’t ignore the women and thankfully he recorded several songs with Queen Sylvia Embry, whose album with her husband John on the Razor label is classic Chicago blues. Her colorful vocals get a boost from Dawkins distinctive guitar tone and urgent fretwork. Nora Jean (now Bruso) was just starting her career and her two cuts show that she was still developing the vocal skills that have elevated her to the upper ranks of the town’s blues singers. That point is driven home by the last two cuts featuring Sister Margo’s strong, powerful singing on two gospel hymns. She is in full command of her voice on “My God Is Real”, another highlight on this package.

Bob Koester and the folks at Delmark are to be commended for this vital glimpse of a forgotten company. The Leric label trained the spotlight on a roster full of deserving talent. And while it didn’t survive the decade, it served as a launching pad for some artists and made sure others like Johnny Christian will not be lost in the haze of history.
Posted by Crossroads Blues Society at 2:01 PM