Joined At The Hip reviewed by Steve Jones 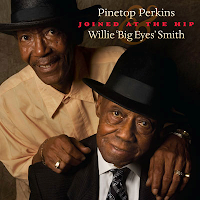 Joined At The Hip

Just mentioning the names of Pinetop Perkins on piano with Willie “Big Eyes” Smith on harp and vocals should be sufficient for a review of a new CD two of two living legends like these guys. Do you really need me to tell you that these 97 and 74 year old blues masters are great and that you should pay attention to everything they do?

Here on this new CD we have 174 years of blues music heritage going back to the Muddy Waters Band and much earlier. Pinetop Perkins has been performing for about 83 years now and pretty much invented his own unique blues piano style which has become a standard. Smith began his career on harp, became famous as Muddy’s drummer, but in his latter years returns to his original instrument and also offers some up fine vocals. Together they play in a natural and unassuming manner. The comfort level here is high- few artists know each other as well as these two. Joining them are guitarists John Primer and Little Frank Krakowski , Bob Stroger on bass and Kenny Smith, Willie’s son, on drums. I believe that Little Frank has sat in with Willie since he was a teenager.

Almost half of the CD are Willie’s songs. They are spot on in all of them, top to bottom. I especially liked “You Better Slow Down”, but they are all good cuts. They also do one Pinetop cut (“Grindin’ Man”, a seminally wonderful song), cuts from both Sonny Boy Williamson’s, Big Bill Broonzy, and a few others. It’s a great set of tunes done by two great older men and some wonderful younger ones who accompany them. They even take a gospel number and blues it up a bit in “Take My Hand, Precious Lord”. “I Would Like to Have a Girl like You” is a good Billy Flynn cover that I really liked, too.

Pinetop Perkins and Willie Smith fans will appreciate that these greats are not yet in decline and are amazingly still pretty much on top of their games. If you’ve never heard either of these guys before there is other earlier stuff that you should first sample, but it can show you what two amazing blues veterans blues can do (even if you are one of the most virginal neophytes of the blues out there). Two men who have played together for over five or more decades can be a pretty damn good thing to listen to!
Posted by Crossroads Blues Society at 1:53 PM