Four Aces and a Harp reviewed by Steve Jones 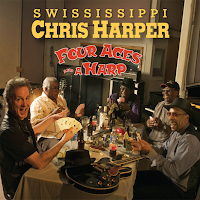 Four Aces and a Harp

Chris Harper appeared on our Crossroads Blues Society radar screen in 2008 with his “Blues is My Life” CD. A guy who is apparently a lifelong harp player and a Swiss businessman turned professional musician, hangs around with the current royalty of Chicago blues and produces great songs with them. This new CD features four real aces of the Chicago blues world along with Harper and a host of other great musicians. The Four Aces are Jimmy Burns, John Primer, Willie “Big Eyes” Smith and Robert Stroger. Also appearing in this jam are “Rockin’ John Burgin, Dave Katzman, Little frank Krakowski, Felix Reyes, Marty Sammon, Rick “Cookin’” Sherry, Kenny “Beady Eyes Smith”, Peaches Staten, Jimmy Sutton, Tail Dragger and Mark Wydra. Quite the lineup!

Filled with great covers of blues classics and one original song, Harper shows off the tongue blocking talent he switched to as a disciple of Sugar Blue. These guys sat around and played and figured out what they wanted to do as time progressed. It is a great mix of Chicago blues. The dual harps on “Born in Arkansas” and vocals by Willie Smith are impressive. The harp and piano nstrumental duo on “Don’t Get Around Much Anymore” are fun and a littlel unexpected. Muddy’s “Long Distance Call” opens to the traditional searing notes on slide guitar and then the soulful harp; Primer, Harper and Willie really sell this one. “I Smell Trouble” is a haunting piece with Jimmy Burns that is a winner, too.

Virtually every legend of Chicago blues is represented here. John Lee Hooker, Sleepy John Estes, Willie Dixon, Lightnin’ Hopkins, Sonny Boy Williamson and so many others get covered here. I couldn’t see any information on line anywhere yet about this CD, but it’s an inspired and good set of covers from the masters done right by many of the remaining and new masters and a Swiss harp disciple who put this together. I enjoyed this CD and think anyone who likes Chicago blues classics will, too.
Posted by Crossroads Blues Society at 12:54 PM