Man From Another Time reviewed by Steve Jones 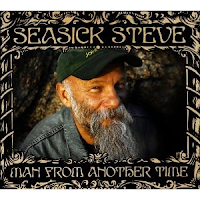 Man From Another Time

It’s embarrassing to me to hear an artist for the first time this past year on Sirius/XM radio who has been around this long and is so talented. Steve Gene Wold, was born in Oakland in 1941, toured with Janis and Joni in the ‘60’s, has been a recording engineer, was a close friend of Kurt Cobain, lived as a busker in Europe for awhile and began getting some real exposure there in 2006. Sporting a long grey beard, a weather beaten John Deere cap and overalls, and using an equally weather beaten set of guitars and other musical pieces, Steve is winding his way to notoriety in the blues scene.

This 2009 effort is Steve’s fourth album (he has a newer one from this year), the first I’ve had the honor to listen to. I had heard a few cuts on BB King’s Bluesville satellite radio station and was impressed; listening to the entire album shows me this guy is the real deal. Performing mostly solo with a one-string didley bow, a three-string Trance Wonder guitar, a guitar made from Morris Minor hub caps, a banjo, a drum box made from small wooden box, a license plate and a piece of carpet that he calls the MDM (Mississippi Drum Machine), and a Roland Cube Amplifier, we get a very hills country folk sound that is real and authentic. Dave Magnusson is on drums for 7 tracks.

He starts off the CD with a song featuring and called the “Diddley Bow”. If a diddley bow can wail, this one surely does. The deep and colorful sound is almost magical, with a tribal thump and rhythm and lyrics reminiscent of the man who used the name of the instrument reversed as his stage name. “That’s All” is a big and driving song that is one of my favorites on the CD. “Seasick Boogie” is another great track: it weaves a hypnotic boogie that grabs at both your mind and soul. These and all songs here are originals; the deluxe edition (which we did not receive) has extra tracks including a cover of a Hank Williams song). “Big, Green and Yeller” is an interesting homage to his John Deere tractor. The title tracks is also quite interesting, where he describes himself as feeling as a man from another time. All the cuts are quite interesting, well done and sung with his world weary yet still determined vocals.

Traditional, authentic, down home, Spartan, impressive, mystical, worldly; these descriptors only begin to capture something about this man and his music. If you like acoustic music delivered in a unique manner with unique instruments and an even more unique performer then perhaps Seasick Steve and his music are something that must be experienced by you. I recommend him- it was a fun ride and I can’t wait to hear the new and earlier work!
Posted by Crossroads Blues Society at 12:12 PM