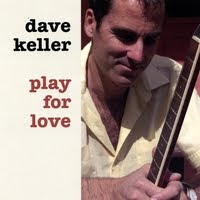 Vermont. A green and rural state with small and beautiful mountains and serves as a pastoral home to cows, fine dairy products like Ben and Jerry’s Ice Cream and…the blues??? The blues! Dave Keller lives in the Green Mountain State and brings us a soulful vocal style that lures the listener in for more and he delivers it!

Keller does all the vocals and guitar work, offering up electric, acoustic and National steel guitar on the thirteen original tracks served up here. Dave wrote all the songs except “To the City”, and that one he co-authored with Dylan May. While his guitar work is precise and very good to listen to, it is his voice that first gets the listeners’ interests peaked. Ronnie Earl’s latest release features Keller as both singer and songwriter. In this CD I got to see a lot more of Keller and I like what I saw, or more appropriately, heard.

There is a lot of heartfelt music delivered to us on this CD. The title track is a thoughtful song that was written shortly after the birth of his second daughter when his gigs were limited. He played on the couch at home for an audience of two, which he claims helped him remember why he started to play music in the first place. He sings that money and pride may be fine to play for, but it’s more important to play for family, friends and the glory of God by playing (and living) for love.

The one instrumental on the CD, “Gabriella” (named for his guitar), closes it out and shows us how Keller can get deep down into the blues with his favorite, strat-styled guitar. It is from an impromptu jam at the live studio recording session for the CD, and it really grooves. Dave shows us that this Massachusetts transplant to Vermont can be soulful and bluesy with the best of them.

There are a lot of fine songs on this CD. He writes, plays and sings passionately of his love for his wife and kids, but he also can get down and play blues or funk it up in cuts like “Give it a Rest.” He is a talented singer, musician and songwriter and I was very impressed with this CD from top to bottom.

The CD features Jan Schulz on Fender bass, Brett Hoffman on drums and Ira Friedman on Hammond organ and Wurlitzer electric piano. These guys are as talented as the front man and create a balanced and sonically great backdrop to showcase this artist. I liked this CD a lot from the first play and now after several plays I want to hear more from Keller and his band!
Posted by Crossroads Blues Society at 2:10 PM