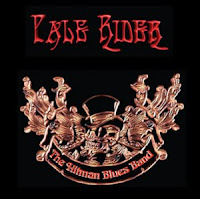 Having never heard of The Hitman Blues Band, I did not know what to expect when I first listened to "Pale Rider". I was pleasantly surprised from the start. Russell "Hitman" Alexander has released four albums since 2001. One was recorded live on stage and the others in the studio. The Hitman Blues Band traveled to the UK in 2004 and has toured there three more times since. In 2008 they toured Europe. They are booked as a blues - rocker type band.

The Hitman's band members vary while on tour except for the leader, Russell Alexander. Russell has also written most of the songs on the albums released. The band for “Pale Rider” consists of Russell Alexander on guitar and lead vocals, Kevin Ryman on keyboards, Mike Porter on bass and Ed "The Hat" D'Alesso on the drum set. This is a real solid mix for a blues band.

"Your Blues" sets the stage for this recording. It is an up tempo solid blues tune. Featured on this song are the Hitman's gritty vocals, his solid guitar licks and lyrics that tell a story. It is all about "Blues in the night”, “your man's no good", “your woman let you down", "the rent is overdue”,” times are good” and "times are hard." But in the end it all comes down to the fact that the band will "Before this night is done we're going to play your blues". Good tune it is, enough said.

On the tune "Miss Catherine", we see a different side of The Hitman Blues Band. Joining the band on this track are a piano, a clarinet, a tuba and a guitar solo from Mike Mulieri. "Miss Catherine" has a Mose Allison, Dr. John swing type sound to it. Russell Alexander's lyrics make you think on this track. One is left to wonder who is or what is this "Miss Catherine?"

This latest release on Nerus Records is a solid, refreshing blues CD. With the bands rock - blues style, Russell "Hitman" Alexander's gritty guitar licks, throaty vocals, blues lyrics and a fine band backing him up we are given a recording that is easy to listen to, keeps your attention and one that you will also remember.
Posted by Crossroads Blues Society at 4:07 PM