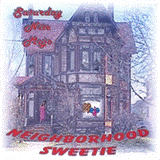 Saturday Nite Mojo was formed in 2002 by four musicians coming from different backgrounds. Each one contributes their own unique style of the blues to the cd Neighbor Sweetie. The group is a blend of rock, southern rock, and blues with a sound all their own.

Inspired by Hendrix, "Neighborhood Sweetie" is about a girl they knew when they were in high school who is really ready to rock and roll. Fueled by the hot guitar licks of Denny Klisuric and Joe Piete, this tune has real driving beat throughout the whole song. The guitar work is superb!!!! Rounding out the band is drummer Ed Durma and Ray Fisher on bass. The follow up cut "Just the Way We Like It" rocks equally as well and the title cut. Ed Durma makes an additional contribution with his great harp solo. "I Ain’t Lyin'" is a lowdown slow blues shuffle with fuzz guitar leads right out the 60's. "Fool No More" is a slow blues tune with some great slide leads. I was a little disappointed with the vocals on this cut. They sounded like vocals you would here on a Frank Zappa album and didn't seem to fit the song. "Boston", written in a minor key, is another great rock and roll number about returning to rekindle a relationship after being away so long. "Nobody Got Dem Blues" is a shuffle stating the anybody can get the blues but nobody has the blues like the artist himself. "Ashtabula Blues" a slow blues cut opening with an unequaled harp solo and continuing with superb guitar solos through out the entire song.

The last couple of songs were written collectively by the entire band. "Old Black Moe" has unique galloping beat and some humorous dialogue in the middle of the song. The final tune "Never Givin' Up" is a rock and roll instrumental with some influence from the Allman Brothers era. The band made the statement that "Never Givin' Up" has been played in a few stadiums and arenas around the United States including Fenway Park, Classic Park, UIC Pavilion, & Cleveland Browns Stadium.

If you are looking for a rock and blues CD with some great 60's rock influence, pick up Neighborhood Sweetie.

Posted by Crossroads Blues Society at 11:53 AM